AJ MCCARRON ADDS ON TO THE TUSCALOOSA PIETA

Share All sharing options for: AJ MCCARRON ADDS ON TO THE TUSCALOOSA PIETA

A.J. McCarron's chest tattoo already had a certain degree of undeniable glory. The words "Bama Boy" in cursive ran across the top, followed by a tattoo of someone with a beard, and then the names of his loved ones scattered around the chest tat over a kind of stained glass motif. We think it was the lead singer of Bon Iver, but it could also be Jesus. With AJ McCarron being the king of SEC quarterback hipsters we will assume it was the lead singer of Bon Iver, and that he is wearing some kind of indie headband.

It's an amazing tattoo, and not just because it's on his chest which hurts like hell to ink. It's impressive because great artists don't rest. No, they edit, and revise, and add on to things until they get them right. A.J. McCarron is just such an artist, and his work never ends.

We have no pictures yet, but this mockup by Luke does give you some idea of the splendor of McCarron's expanded masterpiece. 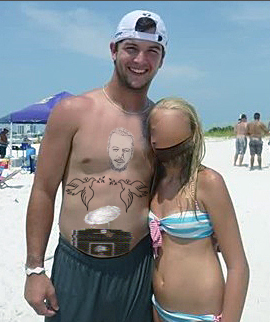 See, there's the lead singer of Bon Iver, and the BCS trophy, and the doves, and the rosary....well, you don't want to know where the rosary is. On a somewhat related note, the SEC has won the last six BCS titles with McCarron, Cam Newton, Greg McElroy, Tim Tebow, Matt Flynn, and Chris Leak at quarterback. Take out Newton, and then realize that this conference doesn't run on defense so much as a burning hatred of offense, period. OFFENSE KILLED OUR MOMMA AND TOOK MY LAWN DARTS! TO HELL WITH YOU OFFENSE! TO HELL WITH YOU AND YOUR FANCY THINKIN'!