Brian the Boardmaster, as always, brings you the Big Board proudly from the fire department boat (The S.S. Reggie Nelson) he carries around his penis on. Entries follow, but only after our reminder to donate to the EDSBS Charity Boogaloo, because your'e a good person and like charitable things like the EDSBS community and Big 12 defenses. 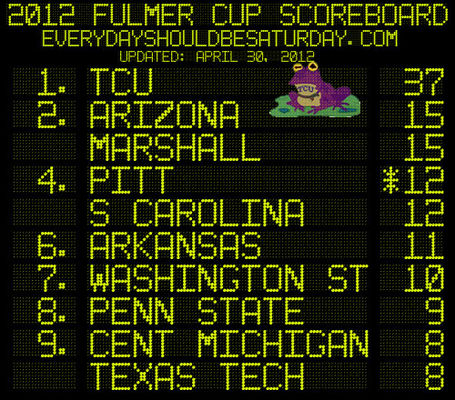 MARSHALL. There's just a buttload of charges here, but all in all four players pulled in eleven misdemeanor charges for Marshall in a barfight/streetfight/barnfight/whatever. A full one point for teamwork, and you have a testament to the three yards and a cloud of dust" school of chipping away at a large Fulmer Cup score: twelve points for the Herd in all, and thought it does not get them close to TCU, but it does position them for a long run down the stretch if they can pile up, like, twenty scooter accidents in a row.

BONUS: Martin Ward's month of living dangerously also included a DUI prior to the barfight, so that's two points, a bonus for the repeat performance later in the barfight, and thus a total of fifteen points for Marshall.

CENTRAL MICHIGAN. FIRE UP, CHIPS! Instructions may not refer to football, as three Central Michigan players were arrested since we last spoke, and banana face is melting otters in the woodwork. Selling psilocybin. That's what we said hair color dripping on the floor Mayor Toad is staring at you and laughing why is he laughing? We mean, mushrooms. Two players were selling mushrooms, and do not look in the mirror. That's a terrible idea.

Three misdemeanor drug charges and one for felony larceny from a vehicle take us to six points, but THAT'S NOT ALL. A third player, Deon Butler, has a stolen property charge for one, and with the bonus for being very active Central Michigan earns a total of eight points for the whole mess. Frogs. Wearing skullcaps. They're all over you please turn off the television it's barking at us.

VEST WIRGINIA. Spelling is likely close to backup QB Ford Childress' pronunciation of his state of residence after being pulled over with a .189 BAC, enough for us to bust out the automatic and rare three point DUI charge for being oustandingly hashed behind the wheel. Next time, follow Uncle Dana's advice: play "I'll Drink To That" by Rihanna, see what woman over 40 in the bar raises a glass, and then have her drive home. Works every time, even if you have to sometimes give her an assumed name. Whatever, she's not the law, man.

WASHINGTON STATE. The ever-lively Palouse is now under the supervision of the Dread Pirate Leach, and please recall the intricate rules of pirate law. Many things are prohibited: the re-fencing of goods, booty-jumping, dreadnoughtery, and shaving. These are all major offenses, and have thus far not resulted in a dry keelhauling for any Wazzu players.*

*Being dragged under the tackling sled once on a gravel road. Land pirates are BRVTAL.

Minor offenses, though, abound. Cornerback Spencer Waseem's assault charge is a misdemeanor, while o-lineman Denzell Dotson's DUI (no details) gets the standard two pointer. All told, throw in a bonus point for doubling up thy offenses, and Wazzu receives four points in the 2012 Fulmer Cup, and cements its reputation as a place where someone, somewhere, at any given time, would like to get drunk, drive to your house, and punch the shit out of you for no reason.

ARKANSAS. The weirdass breaking and entering case of linebacker Tyler Gilbert--who helped kick in a door and steal a paltry sum's worth of fraternity gear from an Arkansas student--barely registers in Arkansas' vast sea of discontent in the wake of the Petrino scandal. Still, a felony theft of property charge (3) and an aggravated residential burglary charge is four points Arkansas earned fair and square, and that John L. Smith will punish by making Gilbert night-parachute into a pen full of wild boar. JLS does it all the time, and it keeps him so dang young. (Mostly through the regular bleeding and need to regenerate new red blood cells after serious blood loss.)

MICHIGAN. Yes, the charges were dismissed against safety Josh Furman, so those three don't count. Remember: we don't beg down points for plea bargains, but a full dismissal of all charges is another thing entirely.

However, Michigan does receive points for Jerald Robinson allegedly doing what you've always wanted to do: destroying or damaging the arm of an automatic parking lot gate. Oh, man, would that be a release. Please let us know if they explode like they do in our dreams, Jerald, and accept this point for the offense and another for an admiration bonus. Two points to the Michigan Wolverines.

MIZZOU. Failure to appear? We're going to need some SEC-quality points out of you yet, Mizzou, but as long as you're in a state with St. Louis, there's hope for racketeering charges yet. One point for the Tigers.

PURDUE. It's creepy when non-existent people try to kiss you, and possibly a misdemeanor. One shaky point to Purdue.

KANSAS. Smoking is not allowed in many Lawrence establishments, but Charlie Weis said you needed to be a pro and practice getting thrown out of bars AND off the team, anyway. Four points for KU in the Fulmer Cup.

NC STATE. Some old business gets Mustafa Greene, running back for the Wolfpack, a total of three points for possession, some old traffic tickets, and the repeat offender tag.