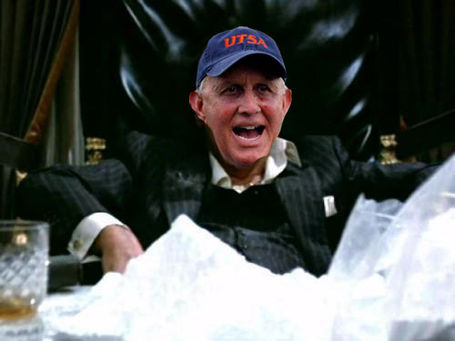 Who knew Larry Coker had the cocaine baron's eye in him? Despite never having played an FBS football game, UT-San Antonio, the fledgling program under the command of the former Miami head coach, has somehow managed to wheedle its way into the WAC, and then jilt it for Conference-USA. They're the great unmade screenplay of college football so far: fought over, paid for two or three times over, and yet still in production. Brilliant work, Larry. We underestimated your cunning, but surviving that long in Miami period is an achievement, much less as head of the Hurricanes football program. (If you have been alive in Miami for longer than a decade, please pat yourself on the back accordingly, and then duck because SOMEONE IS THROWING A KNIFE AT YOU AS WE SPEAK.)

BTW: Nice job ditching the burning hulk of the WAC.

ACTUAL SPRING TYPE GAMES. With their color universe completely screwed at this point, the Oregon Ducks were forced to call themselves teams "light" and "dark" in their spring game. Light: Marcus Mariota was astoundingly productive, and will be the latest Oregon qb to come from nowhere and run Chip Kelly's hot knife through Pac-12 butter. Dark: presumed starting QB Brian Bennett looked sad and lost, mostly because he was, and also because he was watching Mariota potentially usurp his spot on the depth chart.

THE ANTI-BEVELING CROWD WE LONGED FOR EXISTS. The more we meet the TAMU fanbase and hear their deep concerns about the important things in life, the more we are convinced the SEC will welcome them as brothers in arms. (Arms of the deranged, fanged parasite called football that has implanted tentacles in their brain and made them its mad slaves.)

BILL O'BRIEN IS GOING TO BE JUST FINE. Judging by the weight room, that is, because patriotism will add at least one or two wins to the schedule. We assume the hire of Ted Roof will be justified by the public admission that the reason his defenses have struggled so badly is that Ted Roof is actually an endangered bald eagle.

CHRIS RAINEY SPEAKS. Well, of course you should listen.

USC AND LANE KIFFIN. A troll-god marriage made in heaven, thus far.

MINNESOTA FOOTBALL. It's alive, well, and five feet off the ground and needs a stepladder to get out of this amazing donk. (Via reddit/r/cfb, of course.)

MO CLAIBORNE SAYS FOOTBALL IS ON THE TEST AND NOTHING ELSE. Seriously, fuck your Wonderlic, man.

R.I.P, DANDY DON. The oldest LSU site on the planet lost its founder over the weekend. Condolences all around.