Share All sharing options for: THE ANNUAL EDSBS CHARITY DRIVE IS APPROACHING

Ahoy, charity winds. Please recall that in last year's spring charity drive, the EDSBS community competed to win the honor of putting their very logo--or at least some avatar thereof--on the author's hide. While you came very close to making this happen, the $26,000 or so fell short of the $30,000 needed to turn the author into a bitter, scarred piece of your fanbase's domain.

That tattoo would have been Michigan's, the most charitable of all fanbases in 2011. Big Blue's charity edged out Auburn and Alabama, and that's how you get refugee kids proudly repping Brady Hoke's Academy Of Manball Manballedness in the suburbs of Clarkston, Georgia. REFUGEE KIDS LOVE LINEMEN TOO, MICHIGAN. 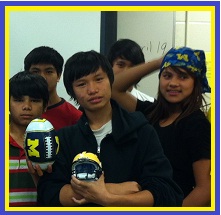 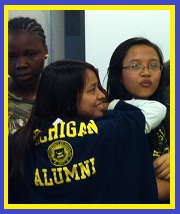 The 2012 EDSBS Charity Boogaloo will be much like last year's. All proceeds will go to Refugee Resettlement and Immigration Services of Atlanta, a fine organization that works with new arrivals to the United States brought here from some of the worst neighborhoods on the planet to reboot their lives. It's what we used to do before we did this, and fortunately these people do it better than we ever did.

Rivalry scores are the accepted form of donation. For instance, as a Florida fan, we would take the following score from 2011....wait....let's see....there's one here somewhere...and now we're crying again, and this isn't helping. Whatever: you pick the score from the game of your choice, leave a note in the donation form about which school you're donating for, and we tally them daily and report back. It all goes to a great cause that needs your help more than ever, and then we do something stupid if you raise enough money.

The discussion of exactly what that stupid thing would be is a matter of some debate. So please, in the comments section, make your own suggestions for this. The threshold, as it was last year, is $30,000 for STUPID THING WE MAKE SPENCER DO. We still get to choose from the menu, though, so it's not entirely a hostage situation. ("Not entirely.")

THE DRIVE BEGINS MONDAY AT 9:00 A.M. You have the weekend to devise terrible things for us to do, and also to scrounge around the couch cushions for money. West Virginia fans, we look forward to your donations because $70.33 is a magnificent sum, and also because you'll make the most delightful giggling noise when you type it.

More specifics on Monday, including all the goods on their programs, etc. Until then: devise your tortures accordingly.