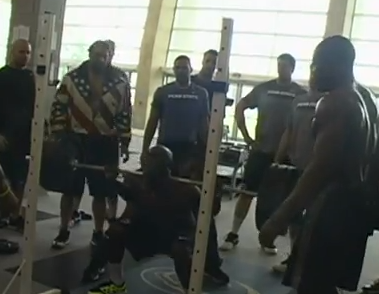 New strength and conditioning coach Rick Muscles not only has the Nittany Lions squatting regularly for the first time, he also manages to make sure the Penn State weight room is consistently our nation's most patriotic. Remember how Teddy Roosevelt squatted a donkey on a bet to win the Spanish-American War? We do, and so does Penn State. (Via.)

V-BCS DAY, INDEED. Today is the day for the details, which will be nasty, fought over tooth and nail, and so boring we'd likely pull our fingernails out of our hands with our teeth out of boredom. (Being close to Jim Delany probably generates that effect, too.) Still, seriously, the BCS as we know it is dead, and that's pretty awesome, sport-wise, and no really pay some attention IT DEAD F'REAL. Mark the fuckin' day or something. Make a plaque. (Or speculate further on what it will look like. That works, too.)

WES LUNT WON THIS ON HEIGHT AND NAME. If the QB competition to replace Brandon Weeden was close at all, the 6'5" frame of Wes Lunt probably won him the job at OK State. If there was a second tiebreaker, it had to be his Okie-ready name. Did you know Brandon Weeden was old? Very, very old? If you didn't, you do now after watching the NFL Draft mention it 400 times an hour.

THE SEC IS ALREADY MAKING FREEDOM RING IN TEXAS. Drinking on the sidewalk? Mike Slive says you're welcome.

ETC: Adios, Pep. This is like most Chinese news articles: medically inaccurate, possibly fictitious, and so good we'll believe it anyway. 'Sup, bear. If you missed it, Holly has some important ASU news for you. We're finishing our tenure on Rome on CBS Sports today, and expect camera-killing jacket.