HEY, LITTLE BUDDY. John Jenkins, the gigantic baked potato of doom for Georgia on the defensive line, fell asleep in the lounge of a dorm. His teammate Tavarres King did exactly what you would do: take a picture of him sucking his thumb, and then put it on the internet. 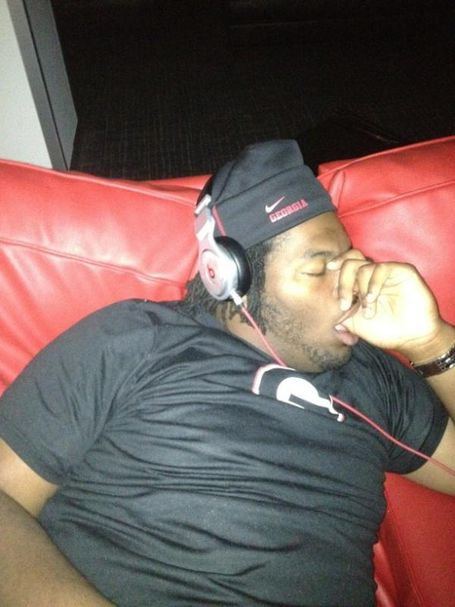 If you see a lineman taunting Jenkins by putting his thumb in his mouth after a pancake, well, it still won't be as good as this, but it will still mark some next-level trolling techniques worthy of applause.

THE BCS IS DEAD. In its current incarnation at least, since every report out of Hollywood, Florida suggests that the four team option is live, the BCS status quo is dead, and the real tweaking left comes in location (neutral site versus home game) and selection. The idea of a committee has been floated, and we hope they solve things like most committees do: by tabling the selection for several weeks, dicking around, and then ultimately ordering lunch and dismissing the proceedings without actually solving anything.

THIS BUS IS DEAD. Austin Stewart, a safety for Texas Tech, managed to survive a collision with a bus on the Texas Tech campus. He's okay, so it's only after saying this that we note this was the first time a Texas Tech defender hit anything in the past year with good results. His roommate's tweet about it includes an informative pic and a description of a bus as "dis bitch."

MMM, SLOT-PIVOT FOR BREAKFAST. That pivot route is so open all the time, even if Urban Meyer's passing game is relatively simple. (This being college, simple ain't bad. Not one bit.)

ETC: Adam Reed is so awesome, and we're gonna hang out and have babies. TAKE THAT, RON BROWN. We went here last night and saw a woman pull off a 7 minute routine to "The Rain Song" by Led Zeppelin. It was honestly a more stunning display of athleticism than anything we saw from the Florida football team last year, and that is not an exaggeration. In necessary SBNation video: Amy K. interviews Buzz Bissinger, and Dan Rubenstein just hangs with RG3, no big deal really seriously okay it is OMG RG3. Quarterbacks: now with extra smarter, per Chris Brown.