To show what your dear departed football warrior-poets are getting into by embracing a professional footballer's career, we bring you occasional guest columnist Anonymous NFL Scout. In order to protect the innocent, we have anonymized both the recruits and the scout, which is more than the Anonymous NFL Scout has ever done.

Take it away, gel-using ratbag of the greater Mid-Atlantic United States: 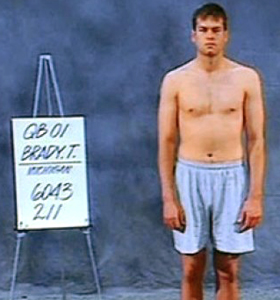 "He was raised by three milk cartons. Kind of sour, a bit fake, plastic in his approach to life. It's not fair, but that's life."

"I'm not here to make friends. Unlike that guy. In steam baths. You know what I'm saying. That he's gay."

"Heard one of his relatives died once. Family of quitters? No thanks."

"His Dad did tech support for HostGator and his Mom was a level 27 mage. /makes dismissive wanking motion"

"His legs are too strong. Too arrogant. Arrogant legs get you nowhere in this league. You gotta have humble extremities. Gritty arms. Blue-collar dick. The ENN-EFF-ELL demands lunchpail balls."

"Ryan Tannehill threw every interception he was asked to throw in college, and that's just what the NFL loves in a guy."

"He's from Tennessee, and that's a geometry I never trust. Parallelograms breed lopsided people always falling over to the right. Pass, do not draft." 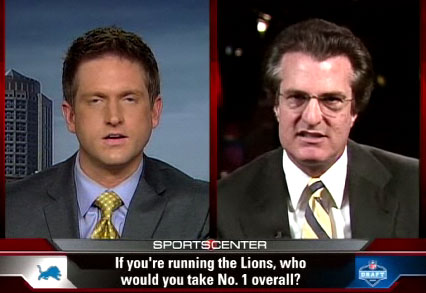 "South Carolina? Fine and all, but we need north-south guys, not south-north guys."

"Volunteering at Big Brothers Big Sisters shows a commitment to a large future family of as-yet imaginary children he'll be unable to support."

"He went to Oregon and didn't test positive for weed, so it's clear his teammates didn't like him. Bad guy."

"Williams punched 3 people in a drunken rage at an off-campus bar once. I like his willingness to do whatever it takes in the heat of the moment."

"Matt Kalil is fine and all, but a reliable source told me he's not Jake Long. Not sure you can take a guy like that in the top 3 picks.

"I just don't know if football is that important to him. He was raised by women, which bothers me. I mean, how tough can he be? It's not his fault, but it's still reality."

"He's got five kids, which shows great hustle. Strong through the A-gap, right? Also keeps 'em accountable by not payin' for them. I like that independence. Gonna be a great NFL coach someday with that parenting style."

"His dependence on oxygen is a concern. Druggies, man."

"Was on an undefeated team twice, so clearly afraid to lose. Fear is not an option in the NFL."

"His arrest crossing the border with illegal steroids shows a willingness to do whatever it takes to get ahead. Wait, he's Polynesian? He should realize the plight of his people and be more respectful of their struggle."

"For a lineman his arms are actually too long. He's gonna have to lose some inches there to get my first-round endorsement."

"His uncle had AIDS. Might a got on him or somethin'. Third round at best."

"I think the drug test was a fluke, and someone will steal him in the second. Wait, he's black? Oh, man. Character issues, then. Fifth round at best.

"He's going to have to stop eating food if he doesn't want to end up being the next JaMarcus Russell."

"He's fat and white and sort of resembles a character from the classic video game 'Punch Out!'. I was never very good at it so I'm pretty sure that means he has an iron jaw."

"He looks you in the eye. It's a sign of contempt. Disrespect. Jesus, I hate this kid. I hate him so much. [empties entire clip into the ground yelling 'D-FENS'}"

"This guy. He wears crazy socks. You know who else wore crazy socks? Payne Stewart. Look where that got him."

"Likes kids but doesn't have any. Need family guys, not future family guys."

"The cut of his circumcision shows an attention to detail that he's followed him his entire life."

"Says 'Tar-ZHAY.' Let the CFL deal with that shit."

"Tweets but has poor Photoshop skills. Not sure he has the creativity to make guys miss.

"His family has a television but aren't a Nielsen household. Not sure his teammates will take his feedback credibly."

"Sold a couple things on eBay but doesn't have a 100% positive feedback rating. Not sure he's willing to sell out for his teammates."

"He voted after turning 18. Too democratic. We need followers, not doers." 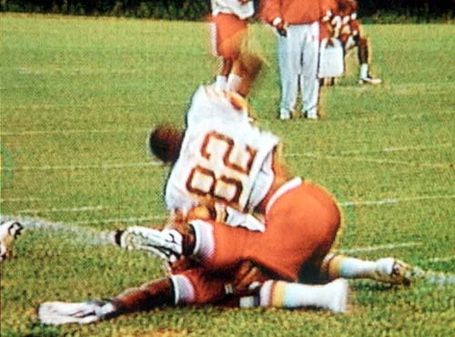 "Charged with resisting arrest, but NOT battery on an officer? Kid's got to finish the drill."

"His first step is too quick. It's like, 'Hey, yo, let's just play a few seconds ahead of everyone. Coaches will hate that lack of team spirit."

"Saw the second X-Files movie. In theaters. Seriously character issues, this one."

"The NFL is about explosive hips, and thus far I haven't seen him burst into flame at the waist and actually explode, killing bystanders and impressing coaches. Call me when you're ejaculating flame, pal, and maybe you'll get in the league."

"Shows too much intelligence under center. Colt McCoy played just fined concussed against the Steelers last year. That's our archetype."

"Do you really want a running back with a brain? Until he gets trepanned, I doubt his commitment to the game."