The Big Board this week arrives early this week. The largest living thing on the planet is a fungus in Oregon, but only because Boardmaster Brian's gigantic dong is technically attached to him (and it tied with Reggie Nelson's, anyway.) Freak of nature at any degree, thank Boardmaster Brian for his generosity, and please see the notes from this very active week of a very active Fulmer Cup season. (In the name of new WWE Hall of Famer Ron Simmons: DAMN, Pitt.) 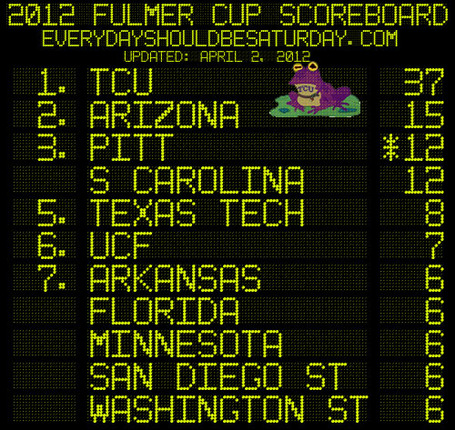 PITT. Everything Jay-Z says he does in 99 Problems that makes him sound like the world's iciest traffic stop contestant? That's the opposite of everything Pitt linebacker Carl Fleming did in his traffic stop in Pittsburgh around 10 p.m. Friday. Please take notes: this is not how to remain calm while being pulled over for doing a 55 in a 54.

1. Do not pull away from the traffic stop. It's the cops. They almost always win chases, especially ones in urban areas with lots of other cops nearby just waiting to block off streets and wait for your ass. Run, and they send dogs and helicopters and you get to run the world's most futile, horrifying obstacle course ever. It's like Ninja Warrior, and exactly so: only like one or two guys ever wins the course, it's all described later in a language you barely understand (law-speak, Japanese, whatever,) and later someone will watch it on television while pointing and laughing. (On TruTV, most likely.)

2. Don't ram into a police car while fleeing.

3. Don't then immediately ram into a guardrail. They don't move, and now you have to run on foot. You are a linebacker in the Big East, not a Tibetan mail courier. Your range is about a mile at best on foot at top speed. Like a monster truck, you'll run out of gas before you get the chance to do much damage.

4. Don't try to eat the weed. You'll just get punched by cops looking to force the evidence out of your mouth, which is exactly what happened here. You will cough it up, because policemen are very good at punching people. Bonus: eating weed is really unpredictable, and you may hallucinate yourself as a bug pinned to a display board during a Cure concert.*

*NOT FROM PERSONAL EXPERIENCE OKAY MAYBE

5. Don't then try to fight your way out of it. This is mostly instinct, but again, you don't have respawn. Cops do. They play Marvel vs. Capcop with like a hundred dudes, and all of them hit the A button really, really hard. Then the prosecutor happily slaps on resisting, and there's more money you owe an attorney. (Oh, you now owe an attorney so much money, and that's almost as bad as the punches to the face and gut to dislodge the weed. Almost.)

The aggravated assault charges are both felonies in the state of PA. Everything else is a misdemeanor, including the piddling amount of weed Fleming was apprehended with, and that was the likely source of all the panic anyway. So instead of getting one point and a misdemeanor charge, Fleming will instead rack up two felony assault charges, five associated misdemeanors, and one bonus point for doing everything completely wrong here.

BOWLING GREEN. Two points for what appears to be a very stupid case of a cop yelling at a college student, who then yelled at the cop, and that's how you get two points and the Daily Princetonian writing about it.

HAWAI'I. The argument that Hawai'i is a whistle stop on the Witness Protection Tour receives no resistance from a story involving a backup QB named "Cayman Shutter" and a DUI charge. Norm Chow was unavailable for comment because he was in China, because he is both an offensive genius and CIA operative. "Cayman Shutter," both a QB and a Caribbean window treatment, receives two points for the DUI and one bonus point for his name. Three points to the Warriors.

ARKANSAS. Michael Whitehurst was peeling out in his BMW in a parking garage in Fayetteville, and this is a terrible idea because campus police wait in those things for you to do exactly that (or to see people breaking into cars, whatever.) Spice enthusiasts will continue to be saddened by the association of fine grinders with the drug trade, but the possession of one along with a small amount of weed gets Arkansas and Alpharetta's fastest white boy two points for the misdemeanor charges, and one point for that ghastly hair. Three points for Arkansas.

P.S. No, Erving Walker does not get points for stealing a three dollar taco because he plays basketball, not football. But A.C. Leonard's back on the team, and that's quease-making for anyone who doesn't like stories of their tight ends throwing their ladies around by their hair. Seriously, Will...