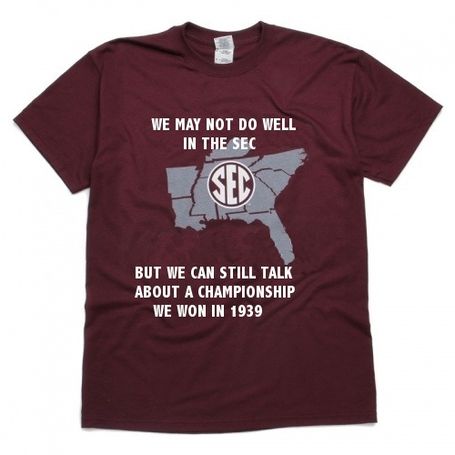 via Cowboys Ride For Free

It bears repeating that this shirt sans Missouri plus North Carolina is extremely ripe for parody, and SB Nation Oklahoma State site Cowboys Ride For Free takes things to their logical conclusion. Fret not, insecure Aggie SEC newcomers: your crazy pants brethren's willingness to blow up your 85 year old, tradition rich, loud-as-f stadium (aka the one strategic advantage you have over your new conference kin) in the name of a few luxury boxes, a couple extra thousand screaming farmers, and keeping up with the joneses prove you'll fit in just fine here.

HAWGWATCH2K12 No matter how tired you are of it, Arkansas' coaching search will keep at it (which is coincidentally exactly how ol' Bobby P. rolled). The Sporting News reports the Razorbacks will have an announcement early next week which could introduce a new head coach. If it's anything other than an interim from the existing staff, or, in what's still a bit of a stretch, the return of former offensive coordinator/now UAB head man Garrick McGee with everyone else's jobs preserved, the Hawgs are putting themselves onto somewhat shaky ground. Taking a chance on a has been/failed retread historically doesn't yield a lot in the way of dividends, but hey, Ron Prince in a cardinal and white sweater vest would pretty much be the bee's knees.

Former Phil Fulmer assistant Doug Matthews (who may also have been the dad on TV's "Boy Meets World", it's impossible to say) echoed the reports that the big man and Arky AD Jeff Long have been in communication. Whether they were simply talking about how much Tide it would take to get out pig grease from flannel or which type of fried topping takes breakfast biscuits most to the next level, we may never know.

TROLOLOLO Michigan State's Mark Dantonio gives approximately zero fucks about his in-state rival Michigan Wolverines. Having beaten the Wolverines four straight times, Dantonio has earned a little room to crow, but given the Wolverines' mercurial rise (and the subsequent talent drain on the very players Coach D was using to make that a reality), he may be best to stick to the scowls, rivers, and lakes that he's used to. Troll on you crazy Tressel disciple, you. Troll on.

JUST LIKE USA TODAY Speak of the devil, one of the nerdlingers (a term of endearment) over at MGoBlog takes a deep dive into evaluating high school talent evaluators. There are charts and analysis and lots of words for you to peruse, but the TL;DR would essentially amount to "Rivals does it better than everyone else." This probably won't surprise many of you, but for those of us who's school of interest's sites are hampered by cronyism beneficiary editors who penny pinch their efforts and do less traffic than the best free options out there, it may come as somewhat of a shock. Regional over emphasis amongst the services is also widespread though little else is too particularly surprising.

EXTREMELY IMPORTANT Mangod ZODIAC MOTHERFUCKER has a lot of important things to say to America's most prominent brands.