In related news, Arkansas head coach-to-be Phil Fulmer is just straight chilling; kicking it with the big homie, Tennessee Titans quarterback Peyton Manning, reminiscing what a crazy world it is and how they got to be exactly where they are today. You crazy for this one, C'lay!

SEVERANCE LOL Predictably, Jessica Dorrell is no longer an employee of the University of Arkansas. For her troubles, she gets $14,000, an agreement to never try to profiteer or otherwise over the Petrino controversy, and the added benefit of never being employable anywhere in major college athletics ever again. You go, bb!

CHARLIE WEIS IS GETTING THE BAND BACK TOGETHER The band, for the record, is Smash Mouth. KU secured the transfer services of Notre Dame tight end former Weis ND recruit, Mike Ragone, giving the Fightin' Jayhawks their 3rd such player in as many months. It must truly be a great time to be a Jayhawk what with the surplus of Hawaii Bowl champion talent flooding the locker room and all. Plus the revenue generated from Turner Gil's left over swear jar by the daily amount of four letter expletives Weis drops even in casual conversations are greater than many developing countries' GDPs, so there's that.

STRIP CLUBS Former Irish blue chipper Aaron Lynch is reportedly all about USF. His reasons include loose women, good whiskey, and whatever else constitutes the life blood of the greater Tampa area. I'm assuming it's some kind of astro glide the rest of the western world isn't aware of yet. Brian Kelly meanwhile is all like: 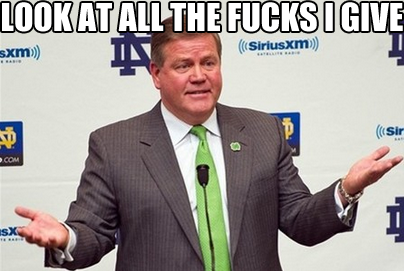