THE SPRING GAME OMNIBUS FOR THE SPORTING GENTLEMAN

Share All sharing options for: THE SPRING GAME OMNIBUS FOR THE SPORTING GENTLEMAN

Spring games occurred this weekend in places not bombarded by the traveling demonstorm covering much of the Midwest. The permacloud turned nasty and moved Indiana and Purdue's scrimmages indoors, but the real casualty was Nebraska. Their perennially popular scrimmage was cancelled, robbing Nebraska of not insignificant spring game revenue.

It did offer Bo Pelini an opportunity to refresh his wakeboarding skills, though.

Then everyone in Nebraska did drugs and got pregnant. Great work, demon weather.

Spring games of note will be recapped below in inconclusive fashion because teams playing themselves tend to tell you very little about said teams, and a bit more about the players in them. Also, we didn't do them all, so if we did not do your team, it is because we hate them and scheme 24/7 against them just as you suspect we did all along.

There were factual things of football interest. AJ McCarron threw three picks because, in his own words, spring games are "for fun." You will have to learn, son: there is nothing fun about Alabama football under Nick Saban, and several rounds of electroshock therapy and Ludovico treatment will drive that home.

Nick Saban did admit to wanting more big plays on offense, an admission whose equivalent for a US President would be divulging nuclear launch codes in a Parade magazine interview. He also got to make a reporter feel stupid (around the 7:40 mark,) so with his spring checklist complete Saban will now return to the film room until SEC Media Days. Adult diapers and feeding tubes are the new Five Hour Energy, and all Alabama coaches will begin using them immediately as part of The Process.

P.S. Jesse Williams looked more than capable at nose tackle, but linebackers were inconclusive. His backwards-ass Australian biorhythms, though, mean he will now immediately go into hibernation for three months, so no interviews were granted. This team will go 10-2 or 9-3 like all off-year Nick Saban teams, and lose two games that leave you baffled before ANNIHILATING THE LIVING SHIT OUT OF SOME POOR TEAM IN A BOWL GAME.

P.P.S. Please don't ever look at Nick Saban, because he is a grown man who is the best person in his profession who makes tons of money but who still can't tolerate people looking at him. This is not made up.

Well, we passed the ball pretty well between Zeke Pike and Kiehl Frazier! That's good! Our secondary gave them yards! That's bad! We still don't have a quarterback? That's bad! Both looked pretty good, though? That's good! We didn't really show any of the new playbook? That's...predictable? Auburn is in that cadre of schools who'd rather not even let you know where the spring game is being played, much less get really excited about it, but if you must take something away it is this:

Other than that, your standard ho-hum Auburn spring scrimmage they begrudgingly allow people to watch. 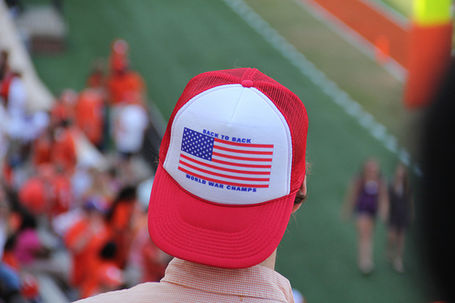 Clemson did little but win global hat wars on Saturday, and occasionally patter Tajh Boyd--who looked meh-tastic at best in the scrimmage--with the occasional boo or two. The perpetual bind of "is our defensive line good, or our offensive line terrible?" applies here, though Chad Morris did continue to mutate the Malzahn-style Tiger attack by putting in two plays clearly jacked from West Virginia's playbook. (If you can't beat 'em, steal that shit and run with it.)

Another game that did nothing to change your basic understandings of the team. The most dangerous unit on the team is the defensive line, which could be absurd, and the most dangerous player is E.J. Manuel. Dangerous to whom? Oh, just about everybody including Florida State, really. Manuel threw fifty passes or so from the pocket, and apparently this is something no one ever wants to see ever, ever again.

[See: Auburn game, but with a definite starter at QB.] Oh, and Kyle says the lines are pretty much what everyone expected, i.e. good defensively and dodgy on the O-line, and that Isaiah Crowell may have improved his pass-blocking a bit. That will be necessary because Aaron Murray will be running for his life often this year, and could use something besides a genial "heads up, brah" as a chip block. (Crowell: chill in all situations, including those you don't want him to be chill in whatsoever like during overload blitz packages.)

Also, Athens, attractive ladies in dresses, and some regrettable sunburns for dudes who drove straight to the spring game from playing golf or some other form of organized laziness. That probably happened too, because this is Georgia, and that is what Georgia people do.

This really sums it up in one image.

Angry Iowa Running Back Hating God appears to be their true offensive coordinator for the moment, with Greg Davis serving as an intern until further notice.

Didn't happen. Nothing to see here. Keep moving. No really, you don't want to see it. There is a blue tarp over this game for a reason. It is to protect you, motorist.

Michigan did not let you take the Denard for anything more than a turn around the driveway. You know how the parts on those things are: expensive, sort of fragile high-performance parts that take forever to order. The fun news for Michigan fans: lots of promising young defenders, developing older names like Craig Roh, and the continuing reappearance of players you expect to see at Michigan.

By that, we mean lumpy dudes who look bad in their uniform but who wreck shop:

Keith Heitzman made a bunch of nice plays today. Talk about his progress, and how do you talk about the overall depth on the defensive line?

(Mattison:) "Yeah, Heitzman is one of those players that may not pass the eye test when he walks out on the field, but you know what? He’s always around the football.

Another re-emergent Michigan tradition: the Bad Idea Michigan Running Back, since Fitzgerald Toussaint appears to be the next great Wolverine running back destined to have an excellent career, rack up tons of yards, and then make an NFL franchise set a draft pick on fire. Bad news: Devin Gardner is very much bad, and not a good quarterback at all, so bubble wrap and barbed wire will be placed around Denard Robinson at all times for the next four months.

BELLDOZER ALL DAY EVERY DAY. Kenny Stills was a bit shaky, but Bob Stoops seemed anti-concerned about this, and justifiably so.

You really should watch this if it comes on, because Steve Spurrier understands that the spring game is about seeing as many touchdowns in as short a span of time as possible, and thus goes deep on two out of every three downs. Everyone scored whenever they wanted to, no running backs saw really significant carries to avoid injury, and guys like Tanner McEvoy and Dylan Thompson riddled the Gamecock secondary for long bombs in the Arena League rules of the day.

The only really salient takeaway, besides OMG BOMBS ON BOMBS ON BOMBS? South Carolina's secondary might have the same breakdown issues they had last year for a good long while, Kenny Miles appears to be a fine backup for Marcus Lattimore, and Steve Spurrier understands you did not drive to Columbia to see the sprint draw.

James Franklin FOUGHT EVERYONE WITH A CLAW HAMMER. Also, they installed the Wildcat this spring, and it looked pretty dang nifty. THEN JAMES FRANKLIN DEMOLISHED A WAFFLE HOUSE WITH HIS BARE HANDS.