ALREADY IN MID-SEASON FORM. Spring in South Carolina, but already fall in their hearts. (Click the pic to go to the video. It's worth it.) 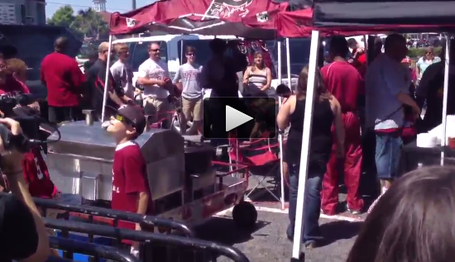 The full scope of this weekend's scrimmages will be given its own large, luxurious post, but at reveille one needs an anthem to get the week off right. (Via.)

BUT MISSISSIPPI STATE OFFERED HIM FIVE STANZAS FIRST. Cam Newton read a poem to recognize the unveiling of a Cam Newton statue on Saturday, and to be entirely fair to Cam, his rhyme scheme is almost good enough to make up for his weak scansion game. The asides to Bo Jackson are funny, but funnier still is the statue, which resembles Cam Newton if he were made of bubblegum and given a shrunken head treatment immediately prior to posing for the artist.

Looking into my daughter’s eyes I read

Beneath the innocence of morning flesh

Concealed, hintings of death she does not heed.

Coldest of winds have blown this hair, and mesh

Of seaweed snarled these miniatures of hands;

Has moved her blood. Parched years that I have seen

That may be hers appear: foul, lingering

Or, fed on hate, she relishes the sting

Of others’ agony; perhaps the cruel

Bride of a syphilitic or a fool.

These speculations sour in the sun.

I have no daughter. I desire none.

Jesus, Cam. That's depressing, and not even about football. (Unless this is Derek Dooley discussing his feelings regarding the Tennessee football program, and yeah, that's totally what this is, isn't it?)

BOWLING GREEN SEEMS LIVELIER THAN USUAL. Two WKU football players were shot in Bowling Green, Kentucky over the weekend. The exact cause of some asshole firing into a crowd is unknown, but it did take place at the Lava Lounge late at night/early in the morning, so we feel safe in saying it involved a perceived slight, a miscalculation of aggression vs. returns on said aggression, and some alcohol. Defensive lineman Tevin Holliman and defensive back Ricardo Singh's injuries were not life-threatening, and both are expected to recover fully.

STEVE MARIUCCI SAYS THAT SOUNDS THEORETICALLY OKAY BUT THERE IS NO CONTACT BUT HE'S JUST THROWIN' IT OUT THERE. He's not interested, and just heard about it, and he really wants a perfect situation, but Arkansas would be great, you know, if he were interested. Which he's not in anything but the most abstract and theoretical of ways, but look there are words on a page, and they have "Steve Mariucci" and "Arkansas" in the same sentence. MISSION ACCOMPLISHED, STEVE.

THE MATTE BLACK WITH THE YELLOW TIGER IS BAAAADAAAAAAAASSSSS. On the whole, Nike did a good job not screwing up the unfuckwithable yellow/black combos of the Mizzou uni, and for Nike in the year 2012 that is quite an accomplishment. The Tiger logo, like all mascots with an open mouth, does suffer from the illusion of looking like he's yelling something like "HEY PAL that's my lawn you take your dog to pee somewhere else ahh never mind you people I swear."

TERRON SANDERS WOULD LIKE TO DISAGREE. Another slight refutation/extension on the Matt Hayes' Urban Meyer piece from last week. We're certain everything in the article is true, and we're also certain everything in Terron Sanders' defense is, too. In Urban's favor: he does find Mike Leach to be a "certified nut-job," and "out of his damn mind" in a good way.

ETC: Gotta carb up, daddy. Trent Richardson is a wonderful human being/unstoppable football golem. We have watched this over 20 times this weekend and have not ceased laughing. Scott Hall appears well on his way to his own Dead Wrestler column. It may not be possible to take a bad wide-frame camera shot at BYU. Marquis of Queensbury rules see yet another English gentleman through a perilous situation.