PETRINO PETRINO NEUTRINO LATRINEO THIRTEENO MERINO EXCALIBURHOTELANDCASINO. When you remember that Bobby Petrino learned his craft in part from noted stripthusiast Mike Price, this whole situation makes a lot more sense. Of course, Price never exposed his university to a potential large-scale employment lawsuit, which, um, can sort of tie an AD's hands. (Not like that. STOP IT.)

This wasn't the only personnel change at Arkansas yesterday, however, as the Razorback swim team's loss is Maryland football's future gain! Perhaps you think hiring a director of Swimming and Diving Operations would be a step back for the Terrapins. Two defensive lineman transferred while you thought that and took an equipment truck with them.

Of course, now we get to speculate wildly over who Arkansas will go after. Not on this list? Dave Wannstedt, who would never drive his mistress anywhere, because he's in a committed relationship with this Camaro. The sheepskin chair covers were a 7th anniversary present. The esteemed Jason Kirk has his own thoughts on the transition, which are also, sadly, Wannstedt-free. We get it - you're all intimidated by the facial hair. What about Ted Roof, then? He hasn't changed jobs in at least two weeks!

Lastly: Yes, $20,000 sounds like a lot of money. But it's actually only a 2004 Chevy Silverado with over 130,000 miles! (This information brought to you by the graphing calculator where Darren Rovell's soul once existed.)

OHIO STATE WILL COUNTER BY SHOWING CONTINUOUS WEBCAM GIRL FOOTAGE ON THE JUMBOTRON. This is the only way to keep up with technological vanguard Michigan, the latest to embrace the hashtag on the field. Things have really progressed in Ann Arbor, considering it was only five years ago that cell phones were considered only fit for casino workers and pawnbrokers. Please do not suggest that Michigan stole this from Mississippi State. Michigan is a place where ideas are born! Ideas like the J/ψ particle, The Polar Express, and a seventeen year long mail bombing campaign pizza.

MAYBE YOU SHOULD FOCUS ON TONE INSTEAD OF JUST MASS. Would the winner of a four-division joint Mountain West-Conference USA megaplex be a more deserving bowl participant than four loss Notre Dame? The answer is to force the Irish to join this increasingly bizarre Super Friends. It'll be like taking your slightly racist grandpa to a Model UN at a nudist resort!

CLEMSON STRESSING CONSISTENCY, FINISHING. So, not being Clemson? Also, Tajh Boyd gained eight pounds last season in the same way that I gained "ten-ish" pounds freshman year of college. (I would also like to reassert that nowhere in Florida's dining halls does it state that the salad bar pudding vats are not intended for grab and go.)

OK FINE ONE MORE. Just out of frame, Gregg Williams offers a child five dollars to punch a puppy in the neck. 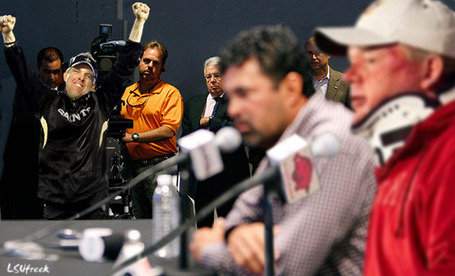