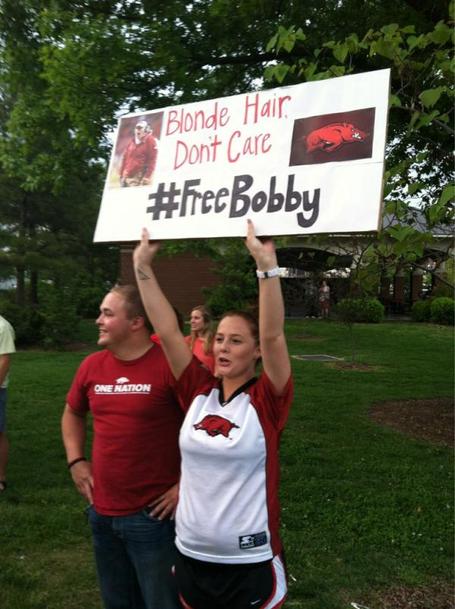 via Shirts with Random Triangles

Tens of people gathered in Fayetteville yesterday for what was either some kind of communal prayer, carefree outdoors swingers party, or perhaps some kind of open auditions for the Gathering of the Juggaloes. Despite the small numbers, people's sheer willingness to prioritize football above else is something very near and dear to our hearts. And besides, if you have a hashtag, your cause can only end with you naked and pleasuring yourself publicly while yelling at passersby. Bobby wouldn't have it any other way.

FOR THE FIRST TIME EVER, ONE DIVISION IS ONE, TWO, AND THREE IN THE FAYETTEVILLE POLICE REPORT CHAMPIONSHIP SERIES The entire attending officer's police report made the rounds yesterday confirming a few things: Bobby Petrino is sort of hardcore (the dude had severe lacerations and went as far as to avoid calling paramedics; that's at least entry level \m/), the officer on the scene seemingly handled basically everything by the books, and Coach is the kind of guy who will tell the truth only when he absolutely has to. This sort of behavior seems rather consistent with what you'd expect from someone wired to put themselves in situations like the one Petrino found himself in, and while we'd love some additional details or revelations that would dare us third party followers to care again, until Petrino is brazenly fired or brazenly welcomed back with reservations, we'll have to settle for this.

1) BEAT UP YOUR FRIENDS 2) ??? 3) GET SUSPENDED So is the situation second year FBS program Michigan safety Josh Furman finds himself in after being arrested for domestic violence, assault and battery, and illegal entry. While the arrest came February 11th, Brady Hoke only just now discovered it after being awoken from the cryogenic chamber the MGoBlog community Kickstarted for him last off season. Furman's attorney would add "It's kind of a goofy case where everyone involved, they are all friends and know each other." All this and two whacky gay caricature parents, this Wednesday on ABC.

JIM L. MORA'S PROFANE SENTIMENTS TOWARDS YOU ARE IRONICALLY QUOTED VERBATIM FROM A BRUINS NATION COMMENT The Jim Mora-era at UCLA is in full swing, and holy f(#@ is it off to a @#)($*@ing good start:

He cursed. Lordy, did he curse. At one point midway through the practice, he gathered the Bruins around him and screamed at them for several long and loud profane minutes. He informed them that their effort stunk and invited them to leave the field if their effort continued to stink, all in words that made the grass blush.

When everything's said and done, the sad truth is that this practice will have proven to be infinitely more interesting than the entirety of the 2012 Bruins football season.

WELCOME, BBs! Georgia State are like totally Sun Belt official. We see no way it ends exactly like this scene (SPOILER ALERT lol) with Eddie Vedder's "Hard Sun" scoring an "In Memoriam" sequence. None at all.