THE MOST SOUTH CAROLINA WAY TO DO SOUTH CAROLINA THINGS. We start with some good news. Charles Sharpe, former South Carolina Agriculture Commissioner arrested for running a cockfighting ring out of state facilities? You're now number two in the list of "Most Infamously South Carolinian People Ever," because South Carolina Lt. Governor Ken Ard has replaced you. 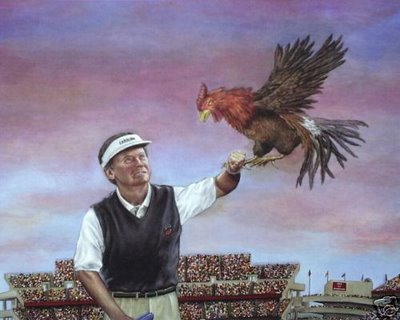 His resume for this title? Having three children named "Jesse, Mason, and LIbby" is enough to qualify you for the finals, but what really gets you there is taking state money as an elected official and using it to go to the 2010 SEC Championship Game. (That would be the 56-17 Auburn defeat of the Gamecocks, if you have forgotten or blocked all the gore from your memory.)

The extra spice making this truly transcendent? While a South Carolinian, Ard is not even a graduate of the University of South Carolina, or Clemson, or any other D-1 program. He is a Wofford Terrier by degree, and was just there for the hell of being there. Not that we begrudge him that desire, but if you're going to be corrupt, make it a corruption that comes straight from the heart, like starting a Boston Terrier fighting ring. (This would be the yippiest, least violent dogfight ever.)

Ard has resigned from his post, and will be replaced by no one because seriously what the hell does a lieutenant governor do? They're political appendices. Remove and proceed without him without fear. (But yeah, we've all been there.)

PAUL JOHNSON'S RESPONSE WAS SHOCKINGLY UNCONCERNED WITH WHAT YOU THINK. Georgia Tech's appeal of the 2009 ACC Title revocation was rejected by the NCAA, meaning the ACC title remains revoked, and Paul Johnson would just love for your smart ass to say something about it so he can test the material integrity of this new tire iron he's got right here.

THE CURSE OF THE CRYSTAL. We were once fond of the trend of two, but it's not edgy enough for us. Introducing the trend of one, we now assume breaking a BCS trophy with your ass has its own curse because Orson Charles, the only player we know who did this, was arrested for DUI. We await the inevitable stealing of Charles, a very talented tight end who broke the Gators' BCS trophy on a recruiting visit, by a very smart NFL team not dissuaded by his DUI arrest. (Rhymes with "GREATRIOTS.") Why didn't he catch more balls at Georgia, we wonder?

DOUGHBOY STADIUM. We're aware of the military slang term in the title, but damned, if that doesn't sound like a delicious, edible stadium. It's in Columbus, GA, so if it were actually made of cookie dough like we imagine, locals would have savaged it long before the ants ever got to it (estimated margin of arrival: 3 seconds.) It's also where Army will play its spring game, because they started spring practice sometime around the middle of last football season. (Please throw a pass to an Abrams tank playing wide receiver.)