TO BE POLITE, LET'S JUST HAVE YOU PAY 15K AND THEN ASK THE CROWD ABOUT THEMSELVES. It is a veiled not-fundraiser fundraiser for someone, and it could be yours for just $14K and change if you're both a Michigan fan and someone who likes to waste money. This is all you should need to hear to spend the money to hear Dave Brandon and Ol' Pizzafarts himself, Brady Hoke (along with someone named "Beilein") talk about success, business challenges, and all those other things very few people actually know how to do without getting really lucky. They'll also presumably talk about themselves, and Don Draper says that's a damned un-Midwestern thing to do. 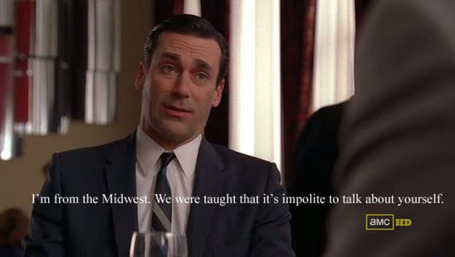 We want to make a joke about how this is as accurate as Squidbillies being an on-point portrayal of the South, but Squidbillies might as well be a documentary. (And a complimentary one at that.) Note: please make Nick Saban do this. Watching him gnaw his arm off would be well worth the $45,000 price tag for a week of his time being squandered on personal interaction.

OTHER MIDWESTERNISH THINGS EVOLVING. Mizzou is dropping the humility, and that's going to have to be par for the course for the border state recently enveloped by the Slive Republic. Volleyball shorts for women are the most ergonomic and practical sporting outfits, and this is not true.

IF MIKE GUNDY IS TRULY A MAN HE SHOULD REGROW HIS 1988 MULLET. He does pretty much what the hell he wants in Stillwater, so the Okie Waterfall is just a step away from the natural progression on display here.

THE OFFICES OF MIKE SHERMAN AND SHERMAN, CLOSED. The offices of the TAMU football program felt "like a law office," per new head coach Kevin Sumlin. Mike Sherman would be the best corrupt personal injury defense lawyer ever, especially if he spent three quarters of his time building an airtight case before fumbling spectacularly in the last quarter of work.

THIS IS SOMETHING YOU DID NOT EXPECT TO SEE EVER. It is possible for the University of Buffalo to taunt someone. Not likely, but it has been done. In other Big Easty news, Pitt released their schedule. Yay, they play VT and Notre Dame. GRRRR. Boo: they play Gardner-Webb on 9/22. [farts, sleeps, wins by 38 points.]

FREE GILLY. Andy's SEC Spring preview subtly mentions our favorite political prisoner, the unfairly subdued Mike Gillislee. He must be awful in pass protection, and that would make a difference because it wouldn't because we have not had a quarterback in two years FREE GILLY.

SHE CAN, INDEED, KICK THE FUCK OUT OF THE BALL. Mo Isom's interview requests surpassed those of Brad Wing, and at LSU under Les Miles that actually means something. This is further evidence she may not be insane, and a further reminder that the bizzarre has become three and sometimes four layers deep at LSU under Miles. (i.e. using a punter as "Popular" to compare to "new level of popularity" made by "female kicker" who may actually be "Good.")

ETC: You're damn right we left Macy Gray a message. We fall under the "Ape Drunk" category. Beards, sadly, do not accentuate the man. (But what if you weave bacon and money into them? WHAT INDEED?)