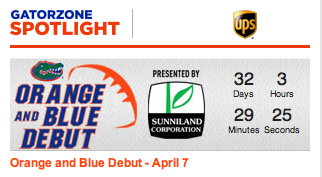 Just a reminder. All hope is not lost, and you do get some brief pseudo-football soon.

GEAUX MEAUX. The charming, very tall, and resilient Mo Isom of the LSU soccer team will try out for placekicker today. You may be cringing at anything bringing up the memories of Katie Hnida, but Isom's been planning this for some time, is a sort of celebrity on campus already, and can wail the shit out of the ball. Caution: this being LSU football, Les Miles probably has a fake designed already involving Isom. Second caution: it will probably work against your team. (Via.)

PLUS WE SORT OF FORGET ABOUT THIS. That kickoffs are now moving forward, and thus becoming safer unless someone can reliably pooch it gambling for field position. Why anyone would do this when you can reduce it to a procedure--i.e. just blasting it out of the back of the endzone for a touchback--is beyond us. It seems against the character of coaches and coaching in general to take something that could be fixed and reliable to something iffy and unpredictable, but again, LES MILES IS OUT THERE WALKING AMONG US.

THE C-WORD IS THE WORST PROFANITY. That would be "Callahan," a genuine profanity in Lincoln and beyond, but if it gets ratings and keeps people listening, baby, some people will drop it until the FCC stops them. Remember that one time Bo Pelini got mad? No? Okay, remember Bo Pelini's whole life being mad? That's so weird for a football coach! Normally such centered, balanced individuals.

THANKS FOR COMING TO TOWN, COLLEGE FOOTBALL HALL OF FAME. And now that you're here, we're cutting the money the state's allowing you hahahahahaha WELCOME TO GEORGIA. Please accept apologetic compensation in free sunshine, red ants, and the swarm of Flamin' Hot Cheetos wrappers continually swirling through downtown Atlanta.

IN INCOMPLETE STUDIES OF THE DAY. Pretty cool of the Washington Post to not mention "people who might be paying their way through a public university" in their survey of four-year graduation rates, but they didn't mention "staying for another football season," either, so let's just assume they have no idea what they're talking about here.

ETC: Mario Balotelli's sorry he went to a strip club before a match, and we all have our own ways of growing. Mario Balotelli is indeed our most EDSBSish of soccer players. (He has set off fireworks indoors, explained he was carrying a shitload of cash in a car accident "because I am rich," turned his garden into an ATV racetrack, and once threw darts at a youth team player. Shut up. We love him, and will love him forever.) Please scroll down here for the fantastic Cleveland poster. Assassin's Creed 3 will feature George Washington and Ben Franklin. You better have Ben naked, and he better be banging old ladies left and right. A very long and very awesome poem.