Oh, sassy Stoops. You're our favorite Stoops. Well, maybe our third or fourth favorite Stoops. "Smugass beating your skull to Skittles Stoops" is the best Stoops, followed closely by "Incredulous Stoopsface Stoops," and followed up in the rear by "Press Conference 'I'm answering that but seriously where the hell did you even get that question' Stoops." If the Stoops family are the Baldwins, he's clearly Alec. (Mike is so obviously Stephen Baldwin, especially in this scene.)

If Bob comes out and says he was misquoted here, you really should grant him some leeway. This weekend Stoops was busy hobnobbing with people whose very scent may cause you to trip balls for life.

This was for OKC's Red Tie Benefit, and did raise a lot of money for HIV/AIDS research, so kudos to all for good work well-done. That said, contact with Wayne Coyne may cause hallucinations, the desire to wear bunny suits, taking videos of you "brushing the fuck out of your teeth," and making hour long songs in graveyards at dawn for the hell of it. Also, we're pretty sure Bob Stoops had no idea who Wayne Coyne was, but if Wayne wants to talk football then we are ready when he is. <---FOOTBALL TALK FROM THE MOOOOOOOON.

(We love Wayne Coyne a lot, and now want this to happen very badly.) 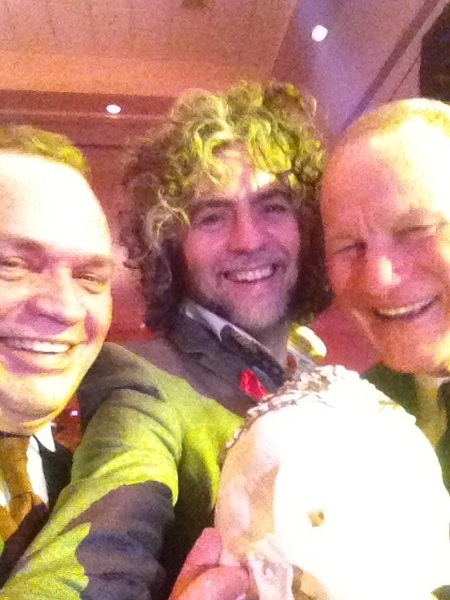 "LSD? Never touched it. Now, one time I told the whole team I put LSD in their Gatorade. I didn't, but damned if they didn't go out and put 42 on Arkansas and all go into the locker room. Billy Sims turned on the shower after the game and tried to drink the water as fast as it came out. Nearly died, but that's the kind of gumption winners have. I did try it with the Cowboys, though. Super Bowls only come once a lifetime, so you might as well enjoy 'em. The skull is Tom Osborne's. Gonna give it back to him when he needs it back. The old milk jug I used as a replacement for it has held up for damn near 30 years. Plastics are amazing, Wayne. Simply amazing."