FRANK MARTIN IS COMING IN FOR A FEW SERIES, COACH SPURRIER

Share All sharing options for: FRANK MARTIN IS COMING IN FOR A FEW SERIES, COACH SPURRIER

A few things transcend the wall between football and basketball here. Bob Huggins is one. Another is John Calipari. Both possess traits we think would serve them well in football, and most especially as EDSBS-friendly coaches. Huggy-Bear went home again after a 20 year bender and found a tracksuit that fit him like glove in Morgantown. Calipari would just outright pay his players and dare you to say shit about it while putting fifty on the board and standing there exactly like this.

Another bouncyhoops person who passes easily through that semipermeable barrier: Frank Martin. 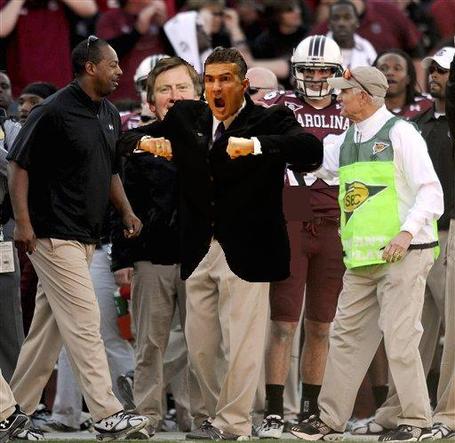 Martin got into coaching when his career as a bouncer became too dangerous for him to continue. ("Gotta recruit bodies to keep from bein' a body, brah.") He is a Huggins protege, so you know he can snort a bottle of Early Times in two minutes flat and then land a Cessna on a rural airstrip if necessary. He wears giant shitkicking boots on the bench, and could easily play an enforcer in a mob drama.

(NOTE: Frank Martin hasn't ever killed anyone, but he has helped some people with their unfortunate breathing addiction. He's a giver.)

He is now coach of South Carolina's basketball team, news Steve Spurrier greeted with an excitement we believe to be entirely self-motivated.

"Frank Martin in my opinion knows how to coach ball,'' Spurrier said. "He would be a heck of a football coach, too.''

We see where this is going. This fall, this very scene will unfold on the sideline in Columbia.

"Get Conor out of there. Now put Dylan in. Get Marcus out of there. Go in, Kenny. Where's Andrew? No one's gettin' it done today. Hell, it's time for someone take ol' Numero Uno's place for a bit. Frank, get in here. I'm just not haulin' the mail today. Go ahead, get in there. It ain't hard. Lee Corso did it, dangit."

Spurrier will then go coach the basketball team shirtless, and have them jack up three pointers for days until Martin tags back in sometime in the third quarter. This seems mad, but it would be good enough for them to win the SEC East if Lattimore's healthy. Early adopters recognize the value of the backup coach already, meaning the USC Trojans will have it in the next 15 minutes, and Oregon will get a robot backup coach next week. The SEC should get it in ten years or so. Notre Dame will begrudgingly adopt the position sometime in 2118.