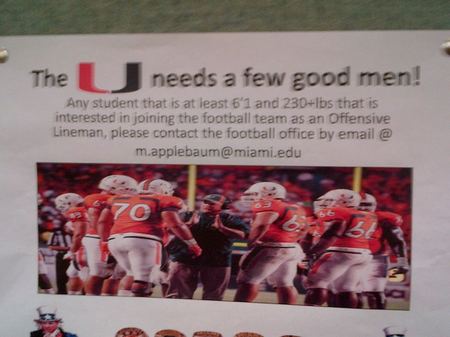 That is real, and it is the Miami football staff asking random walk-ons in a gym to please come to practice if you happen to be 6'1" and over 230 pounds. We repeat: if you are kind of fat, and kind of big, you should please call Al Golden at once. Excuse us.

This explains it all. Or doesn't one bit.

"We used to do that at Maryland and Temple," Deahn told me. "We're just trying to find linemen walk-ons. You get all the skilled guys the traditional way, and you fill your other needs this way."

It's cool, guys. They used to do it at Maryland and Temple, a reasoning sure to resonate with Miami fans who appreciate how much of a compliment that is to the humble Miami football program. The rational response to this is to remind everyone of the vagaries of the depth chart and the rarity of big, warm bodies in any football program, and the one we're really having to lay down on the floor and spin circles for a few minutes laughing.

Feel free to call us homosexuals, Miami fans. You will anyway, and it would not be inaccurate in one sense: we are GAY FOR THIS STORY, and would make love to it at the rest stop of its choosing. (Also via.) Recruit in playgrounds for maximum effect, Al Golden, and then get down with a real lawya.

BRENT PEASE WILL NOW DO ALL THE JOBS. Alligator Army saw this and asked, "If Brent Pease is coaching the wideouts, what is WR coach Aubrey Hill doing?" The thing he's supposed to be doing: nodding along, and then recruiting because that's really what he does under the guise of being a position coach. That's fine as long as you have a control freak like Pease along for the ride, and bad when you don't. (See Florida's offense post-Dan Mullen for how this works.)

TURKEY LEGS FOR EVERYONE. Virginia Tech starts their spring practice today. Bud Foster will begin them as he always does, riding onto the field on 500 pound prize hog he will then slaughter and field-dress in ten minutes.

GREG REID WOULD LIKE A DO-OVER. If he's not injured, all the angst of 2011 evaporates in a flash because Greg Reid is baaaaad, bad, bad.

MAKE MORE TURKEY LEGS FOR THEY ARE A NATIONAL MENACE. They will not hesitate until everyone and their car feel their low-flying rage.

THIS IS AFTER ETC FOR A REASON. oh hey guyz it's the big east schedule ho-hum