SABAN TO THE COWBOYS. This is all a lovely smokescreen for his eventual ascension to the Cowboys' throne, something we've already got figured out with J-Kirk of the mothership. See, Alabama football is already owned by the Dallas Cowboys. This is obvious because no one in the state of Alabama has $4 million to give someone, much less do it year in and year out, and thus the money has to come from somewhere else. That leaves T. Boone Pickens or Jerry Jones, since no one else in the South besides Tyler Perry has any money at all, and Tyler Perry does not like football. 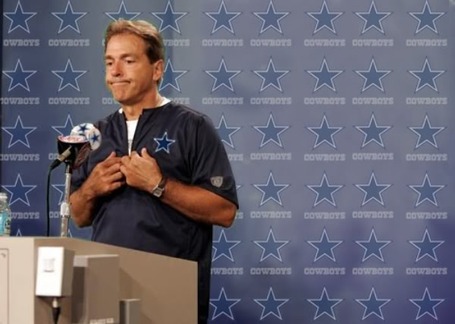 So Jones, already in ownership of his second pro team in Alabama, run by proxies like Paul Bryant, Jr. *, uses Alabama as his hot plate, and keeps Nick Saban on the payroll. Right now Alabama's making higher profit margins than the Cowboys, but when it switches expect Saban to be transferred to the western offices of Jones, Inc. This is all true despite our inability to prove any of it.

MIKE LEACH IN A RAFT. Don't act like this didn't actually happen.

CHARLIE WEIS IS TAKING A PAGE FROM THE RON PRINCE HANDBOOK. A regal strategy is the mass harvest of transfers, and one that reeks of quality desperation. We mean, um, decided strategic advantage.

WE CANNOT BELIEVE THIS WAS CONSIDERED A BAD IDEA. Nick Saban High School was shot down, and that is a shame because the theoretical curriculum would be intense, process-oriented, and yielding some of finest aggregate classes on record. It would also be hopelessly overcrowded, but that goes without saying.

THE MOUNTIN' USA. It may already be dead before its glory could be realized, and that is a shame because the graphics for the "Mountin' USA" would be amazing, indeed.

ETC: We did an interview with Gangrey.com, and everything turned out better than expected. Jon Bois' Sports Cards for Insane People is particularly insane this week, and that's a good thing. Gahhhh, you kill us again and again, USMNT.