Brian "the Caucasian Reggie Nelson" Boardmaster whipped up this on a computer powered by a dynamic wave motion harvester using his penis as an integral part of the apparatus. Thank him for his green energy innovation and his generosity in all things. Points awarded below. 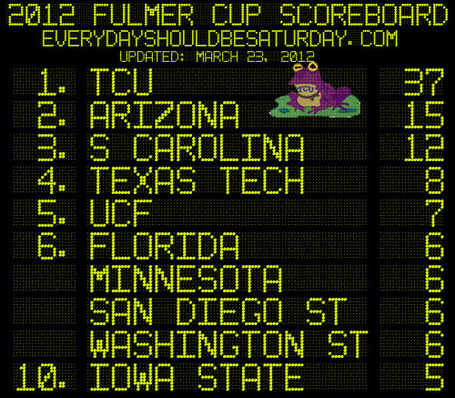 BOSTON COLLEGE. Oh, go ahead and laugh Notre Dame. It is the most Boston College thing ever to make a sex tape, but make it an audio sex tape and then get caught. (You know, like the kind Florida State kickers made in the 1990s.) Doing something like this is invasive and terrible, and that should not be lost here, but also know that if Boston College is making audio tapes of sexual encounters, the Notre Dame equivalent would be a dorm room hand job relayed by semaphore flag. Two points to BC for the misdemeanor and being creepy as hell, but know this is a small punishment to the essays your Jesuit masters will make you write after you take care of the legal problems.

CENTRAL FLORIDA. St. Patrick's Day turned spicy for UCF wide receiver J.J. Morton as he was told to leave a party, refused, told a deputy something unpleasant, and then attempted to punch the deputy before running away and hiding beneath a car. Did this end with pepper spray? You're damn right it ended with pepper spray. For punching a cop and getting a lung full of tacks from Law Enforcement Lysol on March 17th, Morton has become an honorary resident of Boston and earned not one, but two felony charges.

Those two three-point charges and a bonus point for pepper-spraying gets him and the Knights seven points in the 2012 Fulmer Cup. George O'Leary will "deal with the situation," and there are no appropriate jokes we can make about George O'Leary and punishment due to pending litigation.

VIRGINIA TECH. One point for the public intox charge that got Telvion Clark booted from the team. Rails at TOTS claim another victim.

ARKANSAS. The hot crime of the year, debit card theft and fraud, trends ever higher thanks to Arkansas lineman Jason Peacock's use of a stolen debit card to buy gas. $35 doesn't sound like a felony's worth, but Arkansas law says any illicit debit card use is a Class D Felony, so that's three points to Arkansas. Florida was so ahead of the curve here, y'all.