THE COMPLETE WORKS OF WILLIAM SECHAKESPEARE

Share All sharing options for: THE COMPLETE WORKS OF WILLIAM SECHAKESPEARE

The works of William Shakespeare formed the bedrock for much of Western culture, to say nothing of his contributions to the English language. Just take a look at this sample from Sonnet 18:

By chance, or nature's changing course untrimmed.
But thy eternal summer shall not abate
Nor lose possession of that fair thou ow'st;
Nor shall to the right stay thou that must hate

We recognize that, despite the importance of the Bard's collected efforts, they can be extremely inaccessible to modern readers. Where others have tried to tinker with the words themselves, we found a different solution and have transported these classic comedies and tragedies to a more familiar setting - the world of SEC football. (Please note that we include no histories because Neyland VI just fucking drags on forever.)

For your edification, a few samplings from our exciting collection of the Complete Works of William SEChakespeare.

The Two Gentlemen of Corona - Two noblemen, Stephen-Orr and Stephen-Gar, find their friendship strained by love triangles, mistaken identities, and a band of outlaws, but ultimately emerge more bound to one another than ever, all during one comical night at the bowling alley.

The Merry Slives of Windsor - Sir Mike Slive, ever seeking greater fortune, simultaneously courts two married women, Missourah and Aggietha. The women initially fend off his advances and attempt to play tricks on him but eventually submit when Sir Slive puts on Prince's "The Most Beautiful Girl in the World" and begins to strip.

Much Ado About Nutt - The Arkansan prince Don Houston gives a series of meaningless and incomprehensible monologues before being beheaded by Kentuckio, a stray housecat with no back legs. 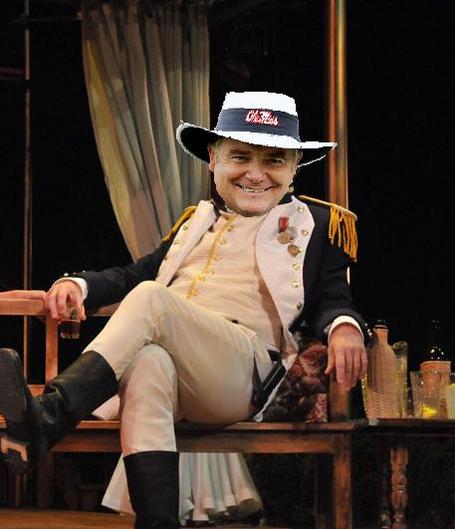 The Hempest - Exiled Florida defensive tackle Marcus Thomas conjures a great cloud of smoke in an attempt to wreck the ship carrying his enemy, Janoris Jenkins. All is forgiven by the end of the play when Jenkins reveals he had been on his way to Thomas with a hold full of Pokey Stix.

A Midsummer Fight's Dream - When Oberon's jester mistakenly places the magical juice from an enchanted flower on Lessander's head instead of Diminutivius, the two men challenge each other to a January duel, which Lessander loses when he enlists as his second the fool Jeffersonius, who panics and stabs himself repeatedly.

PAWWWWL'S Well That Ends Well - A wandering minstrel foments war between two houses, profits handsomely, and successfully flees as a once peaceful nation devours itself.

Combeo and Fooliet - Combeo, a well-coiffed young man from the House of Tuscaloose, falls madly in love with Fooliet, who hails from the Opelikas. Their families cannot allow this unholy match, however, so Fooliet takes her life and an anguished Combeo poisons a tree.

The Taming of the Shoe - The gentlemanly Markrichtio falls madly in love with the fair but obstinate kicker Blairina, and things turn tragic for our hero after the dastardly Dantonio identifies and preys on his weakness. 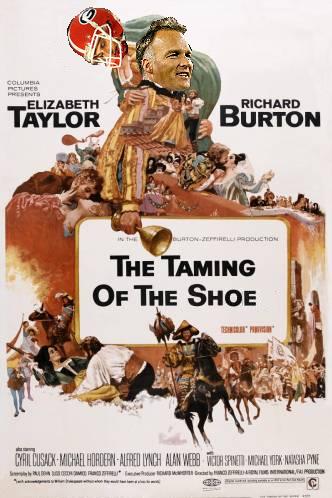 King Fear - The increasingly maddened and unstable King Fear tries to determine which of his three quarterbacks, Brantlia, Driskelle, and Brissettia, love him best, and by the end of the play everyone is dead except for the wise fool, Matt Elam.

Coriolaneus - The brilliant but prickly general Coriolaneus takes command of the ancient nation-state of Tennessee and, at first, wins the hearts of the commoners. He promptly burns half the grain and tries to start several wars before leaving without explanation to lead the Trojan army.

The Comedy of Errors - Penn Wagers attempts to explain the pass interference rules while a slice of cheesecake sits just out of his reach.