PAUL RHOADS GETS GRIZZLY. Assume he just woke up from hibernation after Signing Day. 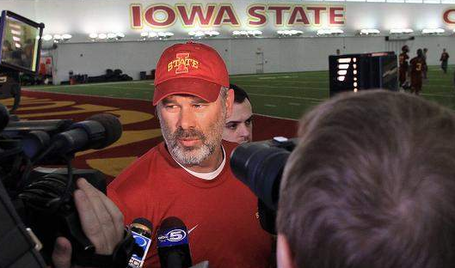 On a beard taxonomy, that is the Pyrenees Shepherd. It comes with forty sheep, a thick woolen sweater, some sort of jaunty felt cap, and a goat's bladder filled with rotgut red wine. (Via.)

GETTING GRASS STAINS ON STUFF TODAY: Notre Dame, Auburn, and Iowa are among those taking the field and realizing that being five pounds overweight for two hours of practice a day in the spring doubles the misery of pretty much everything on a football field. (And everyone at this point is five pounds overweight.) Iowa breaks in Greg Davis at offensive coordinator, so that perimeter blocking? You best work the hell out of it, because it's bubble screen right, bubble screen left for days now, Hawkeyes.

OTHER TYPES OF SPRING CLEANING. Virginia Tech linebacker Telvion Clark has been dismissed from the Hokies' roster after another violation of team rules. This removes a possible starter from the roster, but also was a nice opportunity for Beamer to warm up his asskickin' foot for spring. (The right one is for kickin' ass; the left one is fer steppin.' Every country gentleman makes such distinctions.)

WOODS OUT FOR SPRING. Robert Woods will have surgery on his right ankle, ending his spring practice at USC. The uncoverable wide receiver's loss is huge because Matt Barkley will be able to work extra reps with the other beasts at wide receiver for USC while Woods heals to full killing capacity for the fall, and no one said "huge" meant "hugely bad."

DANNY O'BRIEN'S ROTS MATRIX ISN'T BAD RIGHT NOW. The choices are pretty nice, actually, especially when all of them are "never going back to Maryland to play for Randy Edsall."

STEREOTYPES EXIST FOR A REASON. We would add this to Ramzy's bit on the Cleveland Scene piece about Buckeye fans' stereotypes: you could do this about any and every fanbase, and with some devastating accuracy.

ETC: Skip Bayless seems human, or at least until you ask him what he actually thinks and realize the insanity is bone-deep and unflagging. Plz to also see part about being "ripped." Hugo Chavez: dictator and sportsman. The loss of Schnellenberger, as a reader points out, has left many at FAU bereft and angry. We wrote about running and being so fucking slow trained professionals suggest you never attempt to move quickly again.