MEH ON YOU, TORNADOES

Share All sharing options for: MEH ON YOU, TORNADOES

The first weekend of March is here, and because they are currently popping up all over our corner of America that means it's time to tell tornadoes just how lame they really are. Except for you, Firenado. You're cool with us. 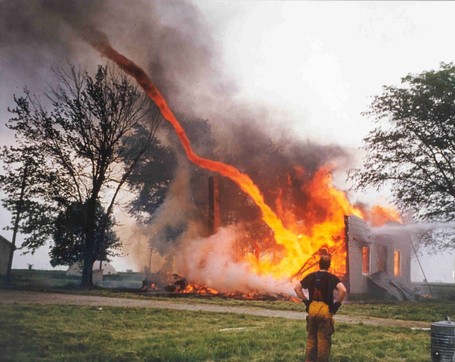 First, you don't come "out of nowhere." You make this loud train sound that gives you at least three seconds to run to the bathroom, and that's hardly stealthy. If you were an assassin, you would give out refunds like at least three or four times a year. You suck at your job. Quit. Love, Lightning and snipers.

You also claim to have this "bomb-like destructive force." In spurts, yes, but you're so random and inconsistent. You can't even level a city properly, tornadoes. There's a house right here, and then a bombed out nothing, and then like a perfectly intact house right next to it. Did your father hate you for never finishing a job? We hope he did. You probably left a whole page on your college application blank. That will only get you into UCF, and thus is its own punishment.

Hey, I'm mad at that comment because I went to UCF! Well, by our logic here you might also be a tornado, so you're not to be trusted anyway. Stop reading now and go back to being a mediocre natural phenomenon just like Orlando, and thank you for that time you beat Georgia. (Remember that? Oh, we do.)

Additionally, hurricanes own your ass, tornadoes, and are by far the superior natural disaster. They only use you as a kind of disaster subcontractor, and even then do most of the work themselves. When it came time to make a film about you, BIll Paxton and Helen Hunt got the call. Two of the most inoffensive people on the planet were your nemeses, tornadoes, and with good reason: you deserve no better. That's no offense to Bill Paxton, but if you put Danny Trejo in a movie about tornadoes they'd just flee the screen the minute a hair on his wispy Mexistache wiggled. Put Bill Paxton against one, and it chases him around for two hours like it rented Mighty Joe Young and wanted a sincere and apologetic refund.

Finally, I still jump and start toward the bathroom every time the wind gusts with any serious force against our house thanks to being in the Georgia Dome during the 2008 SEC Men's Basketball Tourney and blogging from the spot, because even though you're tiny, feeble little sky-farts, it's still enough to kill someone. Nature is both really, really dumb and stingy with the body armor for primates. Work on that, dumbass nature.

Watch your ass, and have a superb weekend despite lameass tornadoes.

ps. To hell with you, tornadoes. You're the Disney Robin Hood Prince John of villain disasters.

pps. This, in case you want to be part of our Tornado Haters' Club.