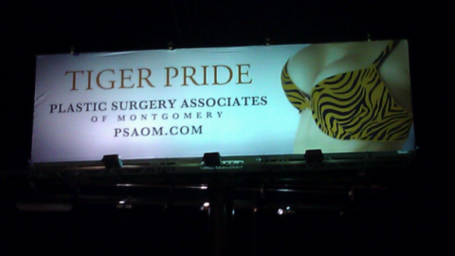 The "Bodda Getta Boobs" are no more, replaced instead by a woman in a non-collegiate-themed bikini. This is a disturbing occasion, but not nearly as disturbing as imagining an Auburn graduate entering a plastic surgeon's office, pausing, and then saying "Make them look like two of Gene Chizik's chins, but on my chest."

We mean this as non-lasciviously as possible: the tiger-striped bra OWNS, and not just because "BOOBS." But it's not our fault if the people of Alabama can't handle style and boobs. It, like everything else in the world ever, is the state of Alabama's fault. ("EYE KNEW THEY THOUGHT THAAAT PAWWWLLLLL.")

THE MOST RINGING ENDORSEMENT EVER. Man, it's so good to be Randy Edsall right now. This is his President talking about him. This is also what happens when you include a killer "um" at just the right point in a transcript, and do so with killing force.

"Well, he's our coach," Loh said finally. "And, uh, I think he has some very, very positive qualities.

A congratulations to the Baltimore Sun's Kevin Cowherd on leaving just the right amount of "uh" in the article. Randy Edsall is going to win eight games this year just to confuse everyone both because a.) he is Randy Edsall, and just pulls this shit to blow the electrodes in your hi-fi brain, and b.) because we're all forgetting this is the ACC where this is not only normal, but likely.

P.S. Maryland's President looks like an Assistant Principal at a middle school.

NOT QUITE YET, SIR. Florida apparently doesn't want to end the LSU series just yet. We take back that thing we said about Jeremy Foley, and correct to "He doesn't want to play anyone interesting BESIDES LSU."

DILLON BAXTER, BON VIVANT. Holly remembers the best moments of Dilon Baxter, even the ones he didn't ever have or hasn't had yet.

MIKE LONDON HAS YOU IN HIS SIGHTS. The Commonwealth of Virginia's most famous former vice cop sends three players on their way. In the speed conference, Ohio State solves a bit of a roster crunch via a transfer to Louisville, where Jordan Whiting is already three times more masculine simply via proximity to Charlie Strong.

EXCITING DETAILS THAT ARE REALLY PRETTY NORMAL. We are certain of this: that the TCU players involved in the drug sweep in February owned a shotgun is far less spectacular than one might think once you remember that this was in Texas, where everyone has a shotgun and uses it for routine household chores. Clean that gutter, Fenton! "All right!" [KA-BOOOOOOOM] "Got it!"

NO, THIS IS WHERE WE ARE. We wanted to weep at first, and then we nodded at this headline, and then we were like, no, it's weeping again.

AWWWWW. The first female cheerleader dream at TAMU will have to wait for a while, while the dream of Danny O'Brien at Oklahoma State is theoretically possible if you go far enough down a rabbit hole of radio rumors and logical possibilities. James Franklin thinks you suggesting this is so disrespectful, OK media.

ETC: We love Kahneman, but for bonus points read the blockquote from his bio about his childhood in Vichy France. Gaining that much weight in a day is probably really awesome for your kidneys and stuff. Oh, she consoled him, all right. This gif is missing a very important element of the equation.