MIND HOW YOU WAVE THAT THING AROUND. The insanity of sending sensitive emails about anything while using your office address boggles, but fifty and sixty year old men in charge of things means you get just that, and public emails, and the obligatory divulging of those emails once reporters and others request them. This also gets you Chuck Neinas fretting about whether West Virginia's extraction operation from the Big 12 while threatening to waggle a lawsuit in Mike Slive's face for getting Mizzou into the SEC.

Neinas mentions that Slive being a lawyer should give him a respect for a lawsuit. This ignorance of the SEC's litigious football history--what other conference has had a subpoena served at media days?-- has reduced us to suggesting this as the official retroactive response for any such threats. 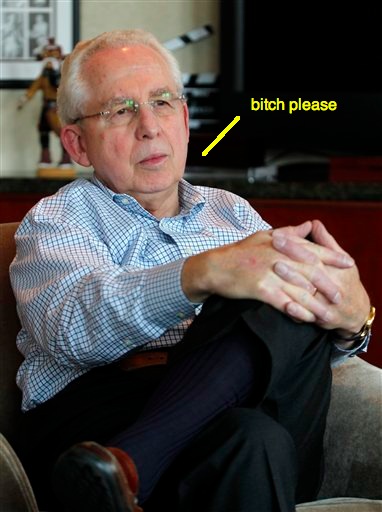 Talking 'bout lawyers like we ain't got none, Chuck Neinas. PFFFFFFFT.

SPRING MEANS SQUATS ON PARADE. Several Florida players are bigger than they were coming into last season, and are showcasing that newfound squat-induced bulk on the field. (Jelani Jenkins, thank you, because we like you very much and hate to see you be in the right place with the numbers against you weight-wise.) The quarterback competition appears to be a near-draw at this point, but the note of intrigue in there is the successful reshuffling of Omarius Hines to running back. I

Provided he can pass block, Hines has as good a chance to start and see significant carries this year as anyone else on the depth chart. That bit is important, though, since pass blocking (and an inability to do so) has been the thing keeping fan favorite Mike Gillislee off the field. You cannot let people run helmet-first into your quarterback's back, you see, even if you have two who are at this point indistinguishable from each other, and see, Will Muschamp sort of cares about offense after all.

"I PLAN TO INTRODUCE MYSELF TO THE OFFENSIVE COORDINATOR IN A FEW MONTHS." BC has an offensive coordinator now! Yay, you, BC football!

STOP THAT YOU PUNKS. Someone keeps stealing the football from Ernie Davis' grave. No one's really sure who put it there in the first place, but we certainly know who took it. [shakes fist at sky] BAAAAAAAAAAANE!!!

FULMER CUP ITEMS, NOTED AND MARKED FOR AWARD LATER TODAY. Considering recent events in Florida, it's probably better that UCF receiver J.J. Worton tangled with a real badge, and not with a glorified mall cop with a gun. Arkansas might have lost a left tackle to this year's hot Fulmer Cup crime, debit card fraud, this time for $35 worth of gas. Steal something worth $35 outright and it's not so bad, but that's a felony charge when you allegedly lift someone's debit card from their person and do it.

ETC: The rightness of the response to the very wrong thing that happened to Fabrice Muamba this weekend. BOSTON IS A TERRIBLE SEX SPAHTS TOWN. This is the greatest single managerial proclamation ever. Wesley Willis now, Wesley Willis forever. Seaborne bourbon aging, ahoy! Frank Howard has the greatest accent ever, and you should listen to it talk about someone named "Schoolboy." Jack Churchill, the only man in World War Two with a documented longbow kill. Soccer match in Greece ends pretty much like anything in Greece lately has ended: everyone loses, something (money, probably) is set on fire, and we all point and go "Yeah, Greece."

FURMAN BISHER, RIP. After the jump, because this takes a minute.

Furman Bisher died yesterday at the age of 93. Longevity is not really an accomplishment in the physical sense, since you can luck out and smoke, drink, and somehow end up with nine decades of life on the ledger. Bisher's productivity was not a matter of this brand of chance. He wrote constantly and until the end, even submitting himself to attempting some guess at what happened in the BCS Title Game. It was an act of masochism like every other analysis of Jordan Jefferson's masterpiece, but he did it just like he did everything else for the better part of 70 years; on the page, and in a wandering, florid prose entirely belonging to him.

I have literally no appreciation for the sports cosmos Bisher worshipped. He used the term "Southern Gentleman" without irony or sarcasm, something I can't do after watching it applied to any and every bullshitting, covertly racist backwoods nutcutter capable of working a lifetime of back nines, cocktail hours, and well-ironed shirts into a career. He loved the Masters, a cult I'll never regard as anything but a celebration of gardening and patrician horseshit. He messed with Bear Bryant and failed disastrously, helped scuttle one of the longest-running periodicals in American history in the process. He did not appreciate satire, or at least a certain brand of it. (To his credit, he did actually fight the Japanese, and thus could be forgiven some degree of grudge.)

(Read that Bear Bryant excerpt, and read the whole thing. It is astonishing, and not just for Bear Bryant hobnobbing with the "outstanding" Bobby Kennedy like it's no big deal.)

But by damn, the productivity. He wrote, and wrote, and generally wrote well. He was polite to younger writers, and helped launch the careers of two generations of other writers. Whatever he was, he was large and largely irreplaceable. I don't get the mountain here at all, but by nature I never would. I do know the shadow it cast, and the winds that blew over and off its face. To say it was a treasured part of the landscape for me would be a lie.

He was a persistent something, and was excellent at being that persistent something for an astonishing length of time. Longevity may be an accident, but monumentality is not. In that sense, nothing was accidental about Furman Bisher. He wrote his way into a kind of irrefutability, which makes death seem weirder for him. If anyone would have had a counterargument, it would have been Bisher. I'm still not convinced he doesn't.