HOW TO PARTY BY CARTER BLACKBURN

Share All sharing options for: HOW TO PARTY BY CARTER BLACKBURN

This weekend, the NCAA Tournament continues, St. Patrick's day rolls around, and, most importantly, Sunday is Anniversary of the Oil Expropriation in Mexico! It's tempting to use all those festivities as an excuse to go nuts. But remember - the best party bro is the PREPARED party bro!

With that in mind, we offer a handful of tips for the weekend partygoer from noted broadcaster Carter Blackburn, who was also the basis for the Kirsten Dunst character in Interview With The Vampire. 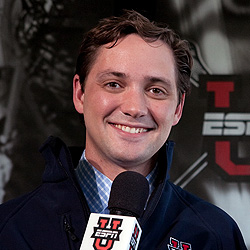 Fisherman's Horf: Keep a quarter pound of unpeeled shrimp in your jacket pocket. Wife, boss, officer - none of them will smell the booze on your breath.

Autopsy of a Leprechaun: Drink one 12 pack of Guinness on International Space Station. This recipe is missing several important steps but professionals will figure the rest out.

The Alternate Reality: Once someone at your party passes out, take turns writing confusing messages on his or her skin suggesting that their family has been kidnapped but offering only very vague details. Then drive the unfortunate victim to a local animal hospital and abandon them in the parking lot.

The Liam Neeson: Chug entire bottle of Campari, yell "I HAVE A VERY SPECIAL SET OF SKILLS," fall off barstool.

The Tea Party: Vomit into mailbox. Take that, government monopoly!

An Officer and a Gentleman: Find a neighbor who works for the police department. Break in, fill the tub, get in and drink two bottles of wine. When neighbor shows up, demand to see a warrant.

Electric Flight Orchestra: Take two shots of 99 Bananas, followed by one Modelo Especial, followed by a potato skin full of Kahlua. (Yes, the order matters.) Congratulations! You now know how to fly a plane.