FRIENDLY COLORS OR NOT WE DON'T TRUST ANYONE WHO OWNS A VAN. 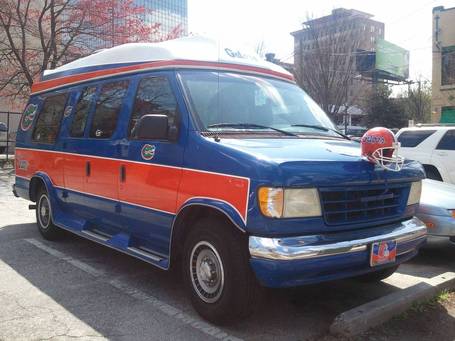 The sad story of the American conversion van haunts you, and with good reason. Once the height of middle-class luxury, replete with captain's chairs, shag carpeting, and a VCR that worked until an unsupervised toddler shoved a sandwich or Matchbox car in the tape slot, the conversion van's sad slide into the "Disreputable Vehicle Category" has changed its perception forever. 20 years ago this van would have been an object of envy, and yet today all you can see is a bound and gagged Bobby Sabelhaus in the back, wriggling on the carpet and asking himself "Seriously, is that carpet on the ceiling? That's just perverse."

IT'S NOT THAT THEY'RE NOT TALENTED, THEY'RE JUST SELF-CENTERED TALENTED PEOPLE. That's basically what's at the core of Will Muschamp's implied argument here, but as with any consideration of Urban Meyer's last two recruiting classes, one must note that a.) the coaching turnover took a serious toll on how things were done throughout the team, and b.) most coaches bitch about their predecessor's recruiting indirectly. Chefs like to rage about the parsley left behind in the cooler by the lunch shift, too, because that's what control freaks do.

THIS IS AROUSING. Full-pad spring practices in progress? Yessssssss. Included in that same roundup of wire stories is UNC's practice playlist.

There were plenty of changes at Wednesday's practice, the most obvious being the music blaring over speakers through the drills. Fedora said the players were allowed to choose the music, which included songs by the Red Hot Chili Peppers, Foster the People, Rihanna and Bob Marley.

UNC players' music requests were outsourced to your mother, evidently.

ANOTHER UNHOLY NIGHT GAME. Let the sacrilege continue because if you're really honest, curmudgeonly fan, you know that gold helmets and the oddly bluish fescue of Notre Dame Stadium look fantastic beneath the lights. The body confidence of a man in his sixties is something men of all ages should admire and emulate. Please also enjoy Spurrier being indistinguishable from a crazy homeless man who wandered onto the field and began ranting about how the convenience store won't sell him no more scratchoffs because of the New World Order and the Rothschilds being scared of all the truth he's got stored in this bag of batteries he's been carrying around this town, son. (HT: reader Ben.)

AND IF WE PAID PEOPLE IT WOULD RUIN WELL NOTHING BECAUSE IT WOULD BE THE SAME. It's not like there's a lot of parity in college athletics for a pay system to ruin.