Boardmaster and part-time men's underwear stress tester Brian sent us this yesterday, so pardon the incorrect date. All scores contained are current and updated for the 2012 Fulmer Cup. Reggie Nelson is more of a man than you in so many ways. Descriptions and awards follow. 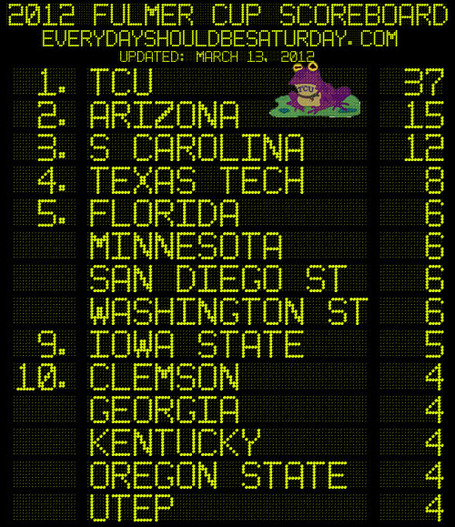 ARIZONA, PLEASE ALLOW MR. RODRIGUEZ TO DO HIS JOB WITH EASE. Not that all of the players involved in the Great Tucson Tussle of 2012 will be booted from the roster as Rich Rodriguez begins the inevitable cleaning of the house. Did you see what Mike Stoops left in their giant walk-in freezer? There's like six tubs full of ACLs out there, all marked "For Nick Foles Only." Knew something was suspicious about a man surviving that many hits without injury.

The grand tally for the incident involving a crowd of football players rushing into a house and beating the living daylights out of everyone in sight is fifteen points. That tally includes four misdemeanor trespassing charges (one each) and three felony assault charges (three points each) along with a bonus point for safety Joshua Robbins allegedly punching a woman in the face (hitting girls bonus) and a bonus point for sheer overkill. You know what's scarier than a million football players running into your house? A BILLION FOOTBALL PLAYERS RUNNING INTO YOUR HOUSE.

CREDIT/DEBIT CARD FRAUD IS SO HOT RIGHT NOW, VOL. 1. Junior Golden Gophers receiver Ge'Shun Harris is gone from the team after the Minneapolis Airport police objected to his taking bags off the baggage carousels at the airport, particularly when he took a credit card from one of the pieces of luggage and used it at several stores to buy things with someone else's theoretical money.

Credit/debit card theft is serious business, so that's two felonies for Harris, who despite being kicked off the team afterward will rack up six points for the Minnesota Golden Gophers.

CREDIT/DEBIT CARD FRAUD IS SO HOT RIGHT NOW, VOL. 2. At least two Texas Tech players promised a big tip when trying to use a credit card to close out a tab at a bar, so at least credit them with some measure of Robin Hood-brand generosity. The trouble comes when you read that the card was not theirs, and that the staff noticed, and that they were arrested and charged with debit/credit card transaction fraud (two felonies) and a charge of misrepresenting their age (one point.)

The bonus point for a total of eight points is awarded for all of the following:

He said Amaro and Williams were wearing Tech Under Armour football attire and, as bar employees called police, the players repeatedly reminded bar staff they were Tech football players.

Bourne said he believes Amaro and Williams shared the drinks with friends. He said several people in their group were dressed in Tech Under Armour gear.

Style points awarded here with a fierceness to the Texas Tech Raiders.

SEC QUALITY MAYHEM. If it's a backup quarterback getting punched in the face and somehow ending up being the one arrested for two outstanding warrants, then Mizzou is already keying in on the SEC's base cultural frequency. Two piddly warrants and a bonus for ignoring the basic rule that if it's past 10 p.m. and you really need to talk to someone of the opposite sex, you probably shouldn't talk to them until morning. BUT I LOOOOOOOOOVE YOU. Sure you do. You also like not getting punched in the face, but here we all are at two in the morning at the police station, aren't we?

ILLINOIS GETS A MERE DUI. Two points for Justin Staples' inability to call a cab with his cellular phone or any of the tens of cellphones a stranger would have happily used to call him a cab, or a campus shuttle service, or a horse-drawn buggy. (Okay, not just any horse-drawn buggy.)

AND SHOCKINGLY AN OUT-OF-STATE MOTORIST IS PULLED OVER IN ALABAMA. In this case it's Branden Smith of Georgia, and yes, he did have weed in the car. One point for UGA for this update published just a few minutes shy of the stoner's appointed spot on the clock.