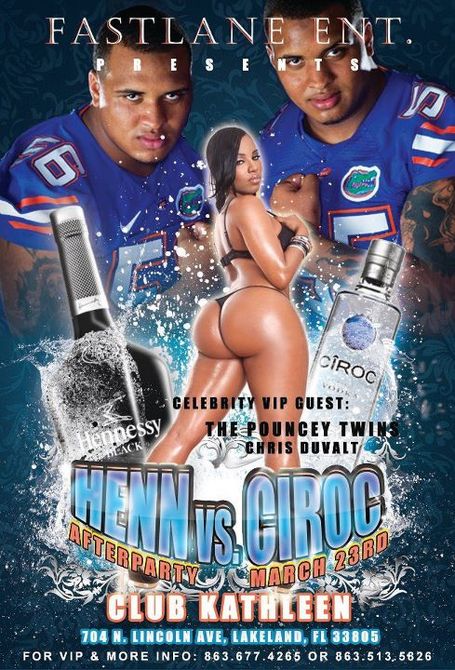 So, the Pouncey twins are doing just fine. In the battle of Henn vs. Ciroc, our money's on being $100 poorer and dizzily vomiting into a trash can at 4 a.m. (HT: Tomahawk Nation)

AND NOW FOR BEING SORT OF BAD AT BIG MATH. With the Big 12 making a new TV deal with ESPN, they get to claim $2.5 BILLION DOLLARS IN REVENUE over the next 13 years, a number that will sound great until everyone else's new tv deals kick in and puts each school at a projected yearly income short of the Pac-12, Big Ten, and any likely SEC tv contract that doesn't involve Mike Slive negotiating with significant brain damage. The exception to this is Texas, who with the Longhorn Network will be just fine as always. This was the story five years ago with the Big 12. This is the story with the Big 12 now, and this will be the story in ten years. #HOOKEM

KNILE DAVIS IS BACK AND THAT IS AWESOME. Petrino wants him to go to the NFL after this year, too, and most definitely not because there's talent in the pipeline, but seriously now everyone's bitching about oversigning and watching every roster move, so please just have a spectacular year and get your ass to the NFL, kthx, love Bobby.

WE'RE ALMOST RELIEVED. Mo Isom did not make the LSU football team for spring, but may try again for fall, thus allowing Isom to return to her business of being a charming and excellent soccer player not thrust into being the internet's new Most Hunted Ladyperson. Jordan Jefferson did not make the LSU football team either, mostly because he is out of eligibility, but also because seriously, we've got this other guy, and maybe it's time to think about life after football, and no seriously, Jordan, you're not on the team anymore. You being here makes everyone sad. Go sell insurance or something.

THE BRAZOS HAS NEVER BEEN THAT COLOR EVER. Other than that, Baylor's new stadium's looking splendid in concept.

TWITTER IS INFORMATIVE AND NOT. Feldman's article on Twitter reminds us that starting a monitoring business for NCAA programs is something someone needs to start because a.) people are lazy and b.) athletic departments enjoy paying people to do things they can't do. (HEY WILLIE LYLES.)

GOODBYE GOODBYE TO JOSE JOSE. The troubled UCF tackle is off the team after an argument with George O'Leary, but there's no bad blood or anything, per Jose Jose himself.

ETC: The Sandwiches Bracket awaits your inevitable outrage. Why shoot something with one bullet when you could do it with two? The Rock playing guitar was only half the shame. Jeremy Shockey has this, and we do not want to know why.