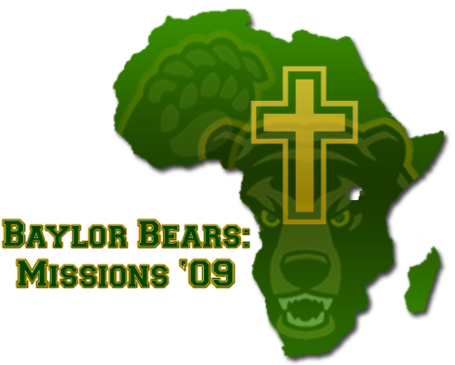 Christ-Bear with the Great Lakes region right over his left eye sort of looks like you just shot him, but whatever. It just made him angrier, and the response is a swipe coming from somewhere deep in Algeria. (Note: portions of Algeria and Texas really aren't that different in a lot of ways.) (Via.)

WE WILL HAPPILY PAY THAT FINE AND PROCEED. It is a shame that North Carolina did not see more of a yield from breaking the rules, and mostly because they got so little out of such extraordinary illicit potential. We see John Blake on the sideline, and hear "agents and Miami parties," and you just assume on paper that this should have been way more than it was both off the field and on the field. Like most things in the Butch Davis era even the scandal, its immediate results, and punishment are all lackluster and desperately lacking compared to the dazzling potential of it all.

Oh, for a proper college football villain. (Looking at you, Vanderbilt. Let's do this, robber barons.) As Andy notes in the linked piece above, still feel free to go ahead and cheat. As bad as UNC was at capitalizing on it, it's still easily worth the potential reward versus the probable punishments at this point.

GARY PATTERSON SAYS THE FAST BIG THEORY OUT LOUD. The SEC not only has more fat people, it has more fat and fast people, says Gary Patterson and everyone else desperately trying to recruit centers and guards to block defensive linemen from the South. This is sure to spark some really delicate but skilled conversation about this topic, and not with uncomfortable racist overtones! <-----nope

FULMER CUPDATE! Later today in full after a travel delay, but yes, Mizzou is going to do just fine in the SEC.

MY GOD. Look at all that football.

AND IN A SIGN DEMOCRACY IS IN FACT ALIVE AND WELL. Mitt Romney goes on Finebaum, and then other things happen, and this is how Clay Travis becomes the Press Secretary. Actually, Clay would be really good at this. He'd be spectacular, especially when he starts asking Ivy League reporters to spell things for him to prove their intelligence. This is not a joke. We will appoint him to this position when elected, along with Secretary of Commerce Steve Paypal and Chief of Staff Bun B.

ARIZONA STATE PREPARES FOR THE HAPPIEST 355 DAYS OF THEIR LIVES. The Sun Devils prepare to replace eight foot seven quarterback Brock Osweiler, and also should slap an ankle monitor/LoJack system on their coach. This is the joke. It will be repeated until it is not true, and Bobby Petrino is so off the hook. Who says Todd Graham doesn't improve lives, sir?

ETC: Mixtape intros are indeed critical. This is the extremely rambly PowerPoint we did for SXSW, and it contains a LOT of RonP.