Share All sharing options for: THE PRESIDENTS RESPOND TO BILL SIMMONS PLAYOFFS QUESTIONS

The college football opinions of our Presidents are a specialty of this blog, a special province we believe to be an important and underutilized corner of the sports blogosphere. The Presidents were huge sports fans with the exception of President McKinley, and he was assassinated by an anarchist. Enjoy sports, or a crazy man named Leon will shoot you and make a way cooler guy your replacement. 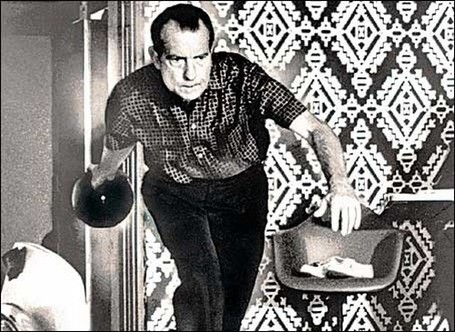 In this vein, our current commander-in-chief interviewed President Barack Obama today. (Bill Simmons is not President. Please do not tell him this. It ruins his fanciful conceits of unlimited power.) Per his office's official requirements, he did ask about a television program of some age (Omar is Obama's favorite character,) talked about sports, and revealed that he favors a four team playoff in college football.

Obama: Well, I’d rather see it eight teams, but four is a good place to start. I think that gets us on the right trend. Nothing is more frustrating than at the end of the season, nobody knows who won. And what, there is some poll? Coaches make a decision? Nobody knows what that means. Because part of what makes sports great, part of what makes March Madness great, the NFL playoffs great, is every once in a while something happens during the playoffs that shows the character of a team.

This is his opinion and he is entitled to it, but it is unfair to let President Obama alone express his opinions on our nation's most pressing matter, especially when it was asked by someone who has never watched more than two games of college football in his life without turning to Sal and saying something side-splittingly funny about how this is like how girls have to pee sitting down.

NOTE: we don't have really definitive feelings on Bill Simmons, but this is what he would write, and he gets paid shitloads of money to do it. This concept that this could happen IS America. Pray it happens to you, and that you get to hire cool people to write whatever the hell they want, too.

Our other founding fathers do deserve to chime in, and indeed are owed the opportunity thanks to our tradition of democracy, fairness, and powerful dudes getting microphones for no reason but lalalalallala this microphone works. Run Home Jack and ourselves examine the historical record.

George Washington: "You people can't figure this out for yourselves? Really? Like, really? I'm gonna go get high on some shitty colonial dank."

John Adams: "GODDAMN YOUR SUGGESTIONS ABOUT THIS THERE IS NO WAY--I'm sorry, I thought we were discussing the Stamp Act. I get really, really fired up about the motherfucking Stamp Act."

Thomas Jefferson: "No system, playoffs or otherwise, will be completely fair to all potential participants. We would thus do well to adhere to the ancient Greek maxim, 'Fuck bitches, get money.'"

James Madison: "I would like to answer that question, but redcoats are rifling through my china cabinet and making lewd overtures to Mrs. Madison. Didn't we at least think about a fence for this shit? A fence or something would have been a great idea."

James Monroe: "I am in favor of a college football playoff, mostly because I am secretly time-traveling Steve Spurrier, and came all the way back in time just to a.) become President when you could just sort of bluff your way into it, and b.) to kill the BCS. I overshot it by a hundred years, but it was totally worth it. "

John Quincy Adams: "Who cares? None of you will listen to me anyways. I arranged for Spain to give us Florida so we could wall it off and turn it into a lawless wasteland for the cholera stricken, not give it statehood."

Andrew Jackson: "Competition is the only way to solve an American contest. Except for you, Florida State. You take these blankets and start walking to Tulsa."

John "Martin" Tyler: "And Didier Drogba puts Chelsea up with this second goal of the day. A cannonade, and then surrender for Arsenal."

James K. Polk: "They Might Be Giants owe my ass like at least $800." [steals mexican soccer playoffs and makes it part of NCAA football]

Millard Fillmore: "I know little on this matter, and shall say less. But I suspect that lIke the Whig Party, the Big East shall have no say in this matter. Thank you, television middle schools."

Franklin Pierce: "Gadzooks, this applejack kicks like seven Tennessee mules. I'm not President. Go talk to that guy over there."

James Buchanan: "Whatever system you go with, make sure you let BYU participate. Those motherfuckers will WRECK your shit."

Abraham Lincoln: "As long as the college football union remains whole, we have nothing to fear but some psychotic redneck actor with a gun screwing up this whole thing for everyone. Um...yeah, this isn't going to work."

Andrew Johnson: "As a proud representative of the Great State of Tennessee this question has no relevance to me whatsoever."

Ulysses S. Grant: "What does Paul Finebaum want? Put me down for the opposite of that. ESS-EEE-SEE LOLOLOL oh I crack myself up. ONE AND OH, BABY!"

Rutherford B. Hayes: "Given my firm belief that the consumption of alcohol tends to muddle the minds of otherwi-[trampled to death by West Virginia fans]"

James A. Garfield: "Whatever you do, do not trust a physician with the answer to this problem. Wash your goddamn hands next time, cretins."

Grover Cleveland: "As President of the United States, I would think that oh excuse me---"

Benjamin Harrison: "Sandwiched between two Grovers. I fear this is some most unfortunate puppet sexual fantasy. Football is not to be played. "

Grover Cleveland REMIX:"---and we're back. Yes, there should be a playoff."

William McKinley: "In my opinion, the BCS is a system that can work with a few alterations. For instance, I believe the trophy should be replaced by a golden cross and 'BCS' should come to stand for 'Bryan Chews Shit.'"

Theodore Roosevelt: "I trust that the conference commissioners will come to a sensible arrangement after meeting with my emissary, Admiral Three Shotguns Lashed To A Rhodesian Rhinoceros."

William H. Taft: "That sounds like an excellent question to consider over a barrel full of crullers."

Woodrow Wilson: "Please ask my hippie brother Warren about this matter. I am having a stroke. Like, a thousand of them. A veritable League of Nations of strokes. This one is Serbia. True to form, it is being a colossal asshole."

Warren G. Harding: "I have no knowledge of any transfer of federal lands to the members of the Fiesta Bowl committee who may or may not be members of my Cabinet."

Calvin Coolidge: [shocks everyone with an 9,000 word blog post on the topic]

Herbert Hoover: "I like the BCS. It's been great. No emergency here. Move along."

Franklin Delano Roosevelt: "As long as my close personal friend Chiang Kai-Shek gets a few billion out of this for smoking opium and banging mistresses, I am in favor of the current system."

Harry Truman: "It pains me to say this, but the whole system has to be blown to pieces to make our point. Perhaps twice." 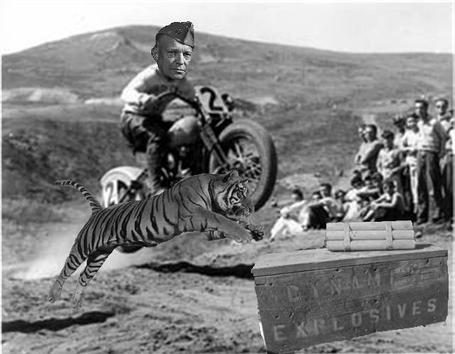 YOU'RE SO FUCKED AND DON'T EVEN KNOW IT.

HOW DARE YOU ASK ME ABOUT THIS SHIT. I'M DWIGHT FUCKING EISENHOWER. DO YOU KNOW WHAT AN UNDERRATED NO-FUCKS-GIVEN BADASS OF AN AMERICAN MONARCH I AM? SMILIN' DWIGHT, JUST PLAYING GOLF? HOOK LINE SINKER AND PART OF THE WHOLE FISHING POLE DOWN THAT THROAT.

I SENT PLANES OVER THE SOVIET UNION BECAUSE I COULD. U MAD, COMMIES? THROW SOME FUCKING CABBAGE AT IT. MAYBE YOU'LL HIT SOMETHING.

I TOLD THE CIA TO DO WHATEVER THE HELL THEY WANTED TO EVEN WHEN I DIDN'T KNOW WHERE SOMEWHERE WAS. IRAN? IT'S CHRISTMAS AND I GOT YOU A SHAH. YOU'RE WELCOME. AFRICA? LIKE A REDNECK ON THE FOURTH OF JULY I JUST THREW SOME FIRECRACKERS IN IT AND SHUT THE LID JUST TO SEE WHAT HAPPENED. BOOM! GOOD TIMES. I HAD SOMEONE STEAL KRUSCHEV'S UNDERWEAR BECAUSE I COULD. THAT MAN WORE BOXERS AND THEY STILL STANK LIKE A FRENCH SLAUGHTERHOUSE. BRIEFS WOULD HAVE BEEN THEIR OWN BIOLOGICAL WEAPON. THEY PROBABLY WERE. GODDAMN I HATE RUSSIANS.

UM, A PLAYOFF? IS ARMY IN IT? BY THE TIME THE CIA'S DONE THEY WILL BE, AND GOD BLESS THEM FOR THAT.

PS. THE V FOR VICTORY WAS FOR YOUR MOTHER AND I DON'T MEAN HER FACE

John F. Kennedy: "Man was not designed to select a single champion. Each team has its own beauty and allure, and each must be offered equal treatment, both on the field and in the broom closet wearing only a fireman's jacket."

Lyndon Baines Johnson: "I've written this 8-point plan for a playoff on my dick. Look at it. Admire it."

King Xerxes VIII, President of the USA 1966-69: "Let the blood of the Athenians feed the flowers of spring. Toss their children to their fathers, the jackals. As their Titans fed on the flesh of their children, so let them return to their natural masters."

Richard Nixon: "(muffled noises) but the important thing is DON'T LET THOSE FILTHY ITALIANS ANYWHERE NEAR THE DAMN THING. They've got lice and illegitimate children and nothing else to offer."

Jimmy Carter: "Let us imagine that each prospective playoff participant is a chemical element, and that said elements atomic weight multiplied by...hello? Are you still there?"

Dave Kovic - "This really shouldn't be so complicated. We just structure a playoff around the existing bowl system. Can I go fuck Sigourney Weaver now?"

William Jefferson Clinton: "Four is a a bit much, but if we could make this a three-way battle, well, that's one I'm sure we could work out. [wiggles eyebrows] [points with thumb]"

The Presidents of the United States of America: "Long as the Little Caesars Bowl will pay us to play 'Peaches' at halftime, who gives a shit?"