YOU'LL FIND THAT ON AISLE 1978. Oh, Pawlll, we got ourselves a HOME IMPROVEMENT NASHNUL CHAMPYUNSHIP. 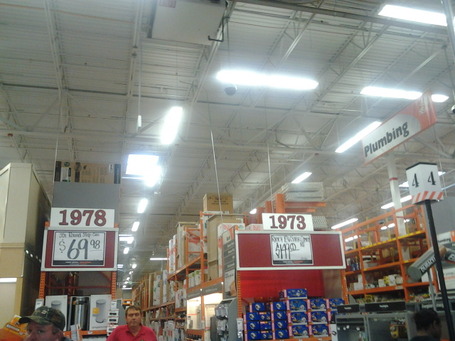 How they make do with only 13 aisles is a wonder, since the other 82 won't fit in the store, but that's Alabamian ingenuity for you. (Via Bo Hicks.) The Dennis Franchione Memorial Emergency Exit in the back is also a nice touch. Speaking of Alabama, um, this won't make a bit of difference.

JORDAN JEFFERSON'S REVIEWS WERE GLOWING (FROM RADIOACTIVITY.) NFL.com ranked the former LSU quarterback as the worst player at the draft. Remember that this is still like being the last person in the graduating class at Cal Tech, but still, this burns with all the things you already knew about Jefferson.

"Jefferson has serious mechanical issues that affect his play," NFL.com said. "He lacks awareness in the pocket and tries to rely on his scrambling ability too heavily, causing him to take bad sacks. There are many fundamental elements of Jefferson's game that need work before he would be ready to run an NFL offense."

We like to mock NFL scouts, but this is entirely accurate. He was also the quarterback Les Miles placed the entire game plan in the hands of for the national title. These are all real and completely insane statements.

LSU ACQUIRES A LITTLE PIECE OF BO PELINI. It's hard to tell exactly how good LSU's secondary was in 2011 due to their complete manhandling of opponents up front, but with the loss of Mo Claiborne at corner they're certainly going to need a new secondary coach to come in and start doing quality work immediately. (Which, per Corn Nation's comments excerpted in that post, he may or may not do. Les Miles football! It's never boring, but you already have the drinking habit to cope with it, LSU fans.)

THESE AREN'T REAL BUT FORWARD THEM TO YOUR MICHIGAN FRIENDS ANYWAY. Charles Sollarsis our greatest troll. (Besides Yahoo, of course.)

THIS IS TOTALLY REAL. Eleven Warriors looks at the installation of the Urban Meyer offense, which is always a fascinating cognitive/learning problem to figure out for coaches. We hope they've fixed the misspelling of "Holgorsen," because we would weep if anyone thought Dana was of Norwegian stock. Chris Brown focuses on the shovel pass, a play run by Bear Bryant back in the 1970s. #StrategyChampionship, and on the sprint-out pass you can run off that if you're lucky enough not to get annihilated by the defensive end. (This is pretty much a condition for any pass play ever.)

WHEEEE AUBURN. The SEC's Daffy Duck cringes, straightens its bill after accidentally blowing it around its head a few times with a loaded shotgun of a 2011 season, and hopes Corey Lemonier can just make all the tackles okay thx. He may be able to do this very thing you propose, because he is awesome.

TEMPLE HAS NOT LEFT THE BIG EAST YET. And if it does not happen on Leap Day, it will never happen. NOW WITH EXCITING VIDEO.

ETC: N.E.R.D. makes the best love songs ever written specifically for a performing arts high school's talent show. Cupcake ATMs will only encourage our aggressive stoner population. New Orleans for the first time is so very nice, and nicely portrayed here. Donald Sterling, "a reptilian disaster of a human being."