The Maryland Transfer Counter now stands at nine as tallied by Testudo Times, though that may be subject to revision now that quarterback Danny O'Brien insists he is still a Terp. Earlier rumors had the 2010 ACC Rookie of the Year O'Brien and starting left tackle Max Garcia leaving the Randy Edsall Dream Job Experience, a move that would only remove the two most important pieces on any offense from the Terps first-string lineup.

True or not, the transfer would not be the most surprising thing in the world. O'Brien's production faded as a sophomore under the sway of the Crowton Effect, and he missed the last two games of the season with a broken arm sustained against Notre Dame. Fightin' Mike Locksley is his third offensive coordinator in three years, and one whose Illinois attacks called for a fair amount of run plays for the quarterback. O'Brien can move, but he can't really run with any credible consistent threat, and that may be where the source of the rumors started in the first place.

Those are all somewhat logical guesses. So is this another, this time a guess at what Randy Edsall truly wants at quarterback. 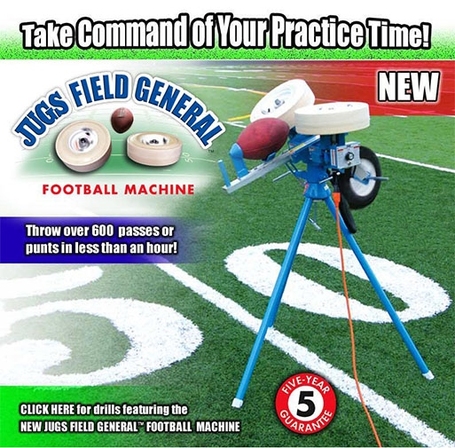 Will never transfer. WIll never complain. Throws up to "600 punts or passes an hour," so it both understands hard work and what can happen when you don't just run the ball like an American should. Won't make trick shot videos. Won't complain when Mike Locksley kicks it to pieces for blowing a gear. Never tries to make something happen out of the pocket. Never audibles. Requires three wheels and one operator, but that's what running backs are for, no?Will never impregnate the daughter of an administrator at least we don't think so. There are some pretty determined ladies out there, though. "I love you Jugs Field General Football Machine. We'll make this work. We'll have beautiful little tripod children. WE WILL.")