A FIELD GUIDE TO MEMPHIS FOOTBALL AND MEMPHIS MEMPHISING

Share All sharing options for: A FIELD GUIDE TO MEMPHIS FOOTBALL AND MEMPHIS MEMPHISING

The Big East has now acquired Memphis. By this reading, they have purchased the entire city, which may be a tragic mistake on the part of the Big East since they have never been to Memphis. And now we get to the full disclosure portion of the program.

The state of Tennessee is a tripartite state operating as a single unit. This loose alliance is based on a common love of pork, a shared scathing dry country wit, and a simmering hatred of others less approximate than local others. We grew up in Middle Tennessee looking down on Memphis because we were taught to, and also because when we went there everything smelled like burning tires outside of a few barbecue joints. Also, they killed MLK and Elvis. This is actually in Tennessee state history textbooks, along with a coupon for a free honey bun at the Starvin' Marvin after the chapter on Johnny . Which one? The one up yonder. You know the one.

That said, let's quickly review the history that led us here, and why Memphis to the Big East is definitely an addition to the conference, and a place they will play sports in from now on.

Memphis was founded by a ball of evil snakes made of delectable pork barbecue. Migrating from St. Louis, they landed on a wrecked riverboat named "The Colonel Tobias P. Shiftless,' and promptly began trading in the three goods that make up the Memphisian economy to this day: barbecue, cotton, and yellow fever. The Spaniards living there were slaughtered shortly after the arrival of the evil barbecue serpents, thus marking the beginning of another Memphis tradition. 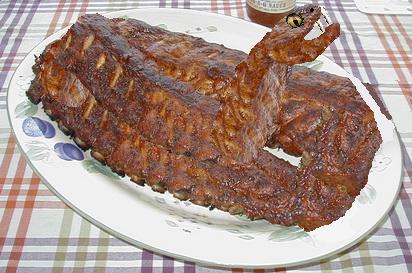 Barbecue serpents remain influential in Memphisian politics to this day.

Memphis fell under the sway of machine politics after yellow fever decimated the city in the 1880s. Talking mules ruled the unruly city for fifty years after this, instituting an order and cleanliness so impressive William Faulkner decided to set his sensational rape fantasy Sanctuary in the city. The talking mules were then deposed by Jerry Lee Lewis, whose wildly unpopular "Pyramid of Human Skulls" initiative drove much business investment to Nashville and beyond. He left out of boredom in 1981.

The city has been ruled by madman and Fed Ex head Fred Smith ever since. He founded the University of Memphis in 1998 as a drive-through liquor stand and laundromat that added classes in order to garner non-profit status. Fred Smith is a great guy, and we say that because he has a lot of money, and don't want people with lots of money not to give us some if we need it someday. He is also a madman. We don't hold that against him.

Jon Calipari may have been there at one point. The entire city is scrubbed clean of fingerprints every night, so we will never be sure of this.

This marks the peak of Memphisian athletics. There is literally nothing else to know about Memphis sports. Trust us.

SINGLE GREATEST ACCOMPLISHMENT AS A CITY

DID THESE COME WITH THE PURCHASE OF MEMPHIS? We don't think so.

WAS THIS A MISTAKE? If 8Ball and MJG are on board? ABSOLUTELY NOT. If not, then yes, this most likely was a mistake. But in a conference of demographic mistakes forced by the expansion of other conferences into all the good choices, this bad choice may be one of the least bad choices the Big East could make.

All but the final paragraph is taken verbatim from "TENNESSEE: A STATE THAT DON'T LIKE TO TALK MUCH SO SHUT UP AND READ THIS HERE." Tennessee State Publications, 1978, without revisions including "Black People Parts Added After All That Hollerin' Y'all Did About The Damned Textbook And All."