2012's teams to embrace at their cuddliest is here. The Fulmer Cup is down there. We'll be in Athens to talk to a group of PR students about new media, meaning we'll probably just tell them all to switch majors, but we have to drive to get there first, and that means leaving about 15 minutes ago. Enjoy? 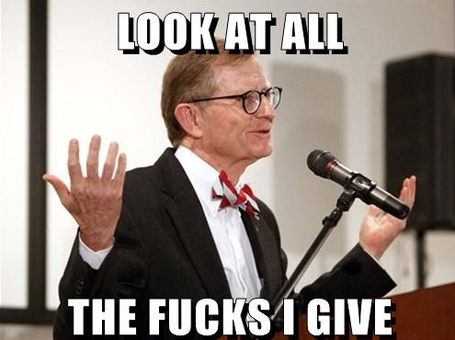 OHIOS STATE: PUBLIC RECKLESSNESS. This is not a real charge. Gordon Gee does not care, and lives his life one quote at a time. You'll have to pardon him. He's been watching the Fast And Furious pentalogy a lot, and you'll have to pardon his candor and the Pagani Zonda he wrapped around the mailbox this morning.

"We hired the best coach and we went out and got the best kids so get a life," Gee said of Bielema's criticisms.

STANFORD. It is not every day that we see something new under the sun, so let us note the Fulmer Cup debut of the Stanford Cardinal with the arrest of star linebacker Shayne Skov for DUI at 2 a.m. this past Sunday.

Skov, who missed most of the 2011 season with a knee injury, was almost home when popped for overly relaxed driving. Stanford libertarians will someday build their own island dork sex fortress where Skov can smash into whatever he likes both on and off the field, but for the moment this charge stands, and no amount of extensive theorizing or publication of well-wrought academic papers will undo it.

A basic DUI with a bonus point for a debut equals three points for the Cardinal, and no, we will not allow you to add bonus points, Stanford, because you are already in Stanford and therefore can stop trying to pad your resumes. YOU'RE SET. GO ROLL IN MONEY YOU GILDED CRETINS.

WASHINGTON STATE. It's always been a bit punchy out on the Palouse, so the Cougars are about due for a good ol' fashioned fraternity rodeo. Enter Washington State's C.J. Mizell, whose tusslin' at the Delta Tau Delta ranch was good for a misdemeanor assault and trespassing charge. Two points to the Cougars in a Pac-12 special this week.

Larry Scott promises that though these crimes seem fairly banal right now, the Pac-12 will be committing minor, slightly humorous crimes in space by 2015, and that Lane Kiffin will blow up the moon once those NCAA sanctions let up a bit. Why blow up the moon?

Why did you even ask, son? BECAUSE IT'S THE MOON.

UTEP. Bat country gets four points--three for a class A family violence charge, and one for hitting girls--for an incident last week involving wide receiver Lavorick Williams and a woman in El Paso. There are very few details here, but the charges are clear enough for an award.