THE STOP SIGN WEIGHTS ARE A CLEAR PARTY FOUL. Don't ask why. Hexagonal weights are a crime against mankind, and this is just something you'll have to accept. The rest of this Mizzou conditioning video from last wintergives you a clear understanding of just how bad winter conditioning drills--now starting up around the country--can truly be. If you're weak, the lifting kills you. If you're out of shape, the running kills you. And you have to move during agility drills, and that's where things really and truly go to shit. 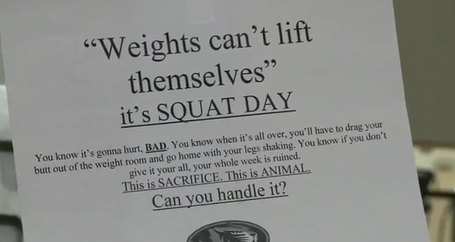 Just one typo away from THIS IS ANIMAL SACRIFICE, man. SO CLOSE. Felder has a very personal account of going through mat drills that should result in you getting queasy just reading it, but examine it nonetheless to get a proper understanding of offseason's agonies, and why playing football is sometimes a relief from everything else a student-athlete is asked to do as a term of their membership in the big heapem jock club.

IN THINGS THAT REQUIRE A BIT MORE LENGTH. Your mother.

NO REALLY THIS NEEDS TO BE ADDRESSED AT GREATER LENGTH. Jim Delany and the Big Ten are "open and curious" about playoff possibilities. We'll write a bit more about this in a bit, but the best part is obviously the on-campus game location for the plus-one, and the worst part is listening to Jim Delany mouth-farting along pompously about anything, much less how college football should be.

HEY GUYS HE'S HERE! HE'S HEEEEEERE. Penn State's Bill O'Brien shows up to State College, PA! To coach football! Pretty neat stuff! He was coaching in the "Super Bowl," which despite crowning an average team with astonishing hyperfocus talents is no definitive argument against a college football playoff. (The idea of a Coughlin equivalent in college doing the same on a hot d-line and a QB who can make three clutch throws a game while you screw yourself at every opportunity, though? Oh, Tommy Tuberville is totally listening to this argument that you regard as a counter to playoff demands, because he'd THRIVE in that.)

LANE KIFFIN, MATH GENIUS. Hinton analyzes how USC is waiting out sanctions with some brilliant redshirting maneuvers. Lane Kiffin is good at his job and has many skills, and seriously, that didn't even hurt to type.

FULMER CUP NOTES: This will be updated today, but yes, Stanford LB Shayne Skov got a DUI, and Wazzu went a-brawling on the wide open range of the Palouse.

WELL LOOK AT THAT. Bubbaprog was on television, meaning he could screencap himself and THE META CIRCLE IS COMPLETE.