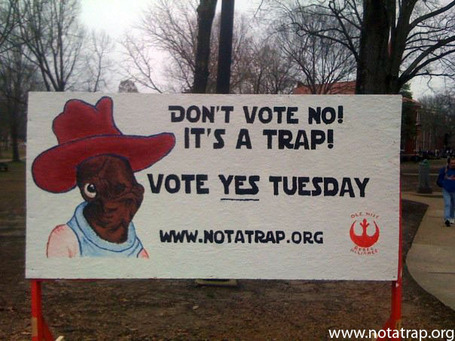 You fired David Cutcliffe for sketchy reasons. You then hired Ed Orgeron, and had to bear the agony of the great YAWBEEBAWING of Rebel football. You didn't embrace Ackbar, Ole Miss, and therefore earned the wrath of vengeful shrimp-gods everywhere and reaped the whirlwind as Houston Nutt drove your program off the levee and into the drink. You might have done the right thing in hiring Hugh Freeze, but that's TBD. In summary, the past decade has been one long disaster for Ole MIss save for the bubble of the Houston Nutt bowl years (and yes, the victory over Florida in the Swamp in '08.)

So go ahead and revel in Eli Manning winning the Super Bowl.You take that, because you can, and should, because it's been rough, Unrecognized Ackbars of the Mississippi Territory. And shit, Notre Dame, you take the Justin Tuck-ening of Tom Brady as some kind of bonus, since it's been rough for y'all, too, and also because in all the talk of the QBs the real club that put down the Patriots last night was wielded not by a quarterback, but by Tuck and the d-line raging around blockers and dismantling the precision of Brady's game.

Everyone just take what they can, because this here water buffalo is the last carcass you'll get for a while. Take a piece while you can, because the vultures of the offseason are here in force, and will be here for quite some time.

AND WHILE WE'RE PICKING COLLEGE TIDBITS OUT OF THE PROFESSIONAL GAME. You really should read a few things on the game, if only because they're written so very well: Dan Wetzel's Tom Brady timeline is one, Bruce Arthur's opus on the game itself is another, and then finish up with Bomani's piece on the hazy parameters for evaluating what makes a quarterback great. Also, revisit the Polish Goalline defense the Giants may have cagily employed to wear down the clock in the waning seconds. (Or used on accident. It's hard to tell with football in the final throes of a game.)

ENJOY HAVING A FOOTBALL COACH, PENN STATE. For he is now on the job, albeit after taking a brief scumbag turn in the Super Bowl. QUICK: ask him if he dunked a basketball.

WELL AT LEAST FLORIDA STATE IS GOING TO GET SOME MONEY FROM THIS. They do crave yet another above ground pool, so good on Florida State for somehow managing to get out of a tough game, potentially scheduling another slightly less daunting but still respectable opponent, getting a potential advantage in a lawsuit, and making the Big East/Big 12 tussle over WVU leaving even spicier than it already was. That's a lot to accomplish in one move, but Jimbo seems to be a fan of the epic multitask (i.e. beating Florida, continuing to lose to Wake Forest, and trolling everyone hard in recruiting all in the same year.)

RELATING TO WEST VIRGINIA. They happen to be the best against the best, statistically speaking, while Arizona State was just as inconsistent as one might imagine.

THIS IS HORRENDOUS. We doubt this is just a novelty variation. The sooner Florida ditches the awful white-shadowed toothy serifs crapfont that crept in sometime in late 2009, the better. Nothing good has happened with it, and nothing will because it is cursed. The blue alligator pattern helmet will be something we all laugh at heartily in ten years while trying to forget the pain of watching it bounce off the turf, because that is a helmet made to be sacked or tackled disastrously. Fuck this design. Fuck it hard and out of our lives. FRUITY CURSIVE FOREVER.

At least the recruiting class was solid. [repeats to self 500 times]

WE HOPE YOU ENJOYED YOUR 24 HOURS WITH THE HUSKIES. NIU loses an offensive coordinator after a single rotation of the earth.

WANT. We've been reading about seasteading a lot lately because we like to laugh at naive rich people who pretend Lord of the Flies can't happen to them. Why leave when we already have paradise?