Brian the Boardmaster is still working late on a Friday, digging the ditches of tomorrow with his penis like Enkidu did bring forth the mighty Euphrates with his Reggie Nelson-esque member. Thank him for his generosity in all areas, and find the week's awards of Fulmer Cup points below. 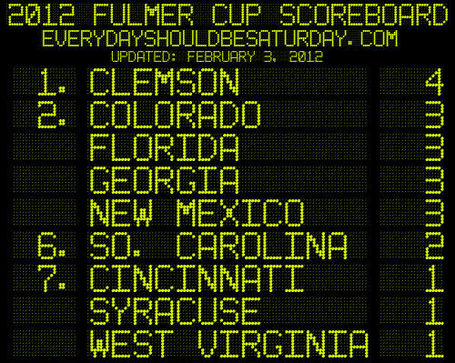 CORRECTION: NO CHARGES HAVE BEEN FILED IN THE GEORGIA CASE. The error is struck out but left in below, and Clemson is currently in a very early lead.

DAWGS IN THE FRONT, LET YOUR RICHT STOMP. Losing three players in a single day for "team rules violations" really should result in a bit more than three points. However, those of you familiar with the long term trends of the Fulmer Cup know things. You know that UGA are the dollar store shoppers of Fulmer Cup charges, famous for picking up yardage in one and two point chunks. (Dooleyesque!) You also know that we will tend to award only what is charged, and conservatively at that.

So of course only two of the three players are charged with stealing from teammates in dorms, and of course they stole a relatively small amount of goods in the process. With less than $500 stolen in cash between two players, the misdemeanor charges amount to two point, and with the requisite bonus point for stealing from teammates Georgia only gets three points from the incident.

Note: if this had happened in Lee County, Alabama, these gentlemen would all be charged with racketeering, theft, breaking and entering, home invasion, and given multiple charges of each. All three are gone from the team, meaning three members from 2010's "Dream Team" are already gone due to completely non-football reasons. Athens: she doesn't eat recruiting classes, but she's certainly been known to nibble.

CLEMSON LOSES A WIDE RECEIVER TO EXTREMELY POOR NEGOTIATING SKILLS. Wide receiver Joe Craig picks up a single point for misdemeanor criminal domestic violence, a point for hitting girls, a bonus point for repeat offender on this front, and the bonus point because we simply don't feel like three points is enough for the second time you got caught getting physical with a lady. Four points are hereby awarded to Clemson, who to their credit booted Craig from the team for his second offense.

COLORADO IS ON FIRE. Will Pericak was last mentioned as a person of interest in the random kicking of cars in Boulder one drunken evening in the Vibram Five Fingers Capital of the World, but now he takes a star turn burning trash in bars and showing bartenders proper celebration technique in the process.

According to the report, at around 1 a.m. Sunday, a bartender at the Pearl Street Pub and Cellar at 1108 Pearl St. said Pericak lit the contents of a metal bucket on fire. Bartenders said the bucket contained trash and miscellaneous papers and were able to put it out with no damage to the bar.

Two misdemeanors and a bonus point for setting something on fire and being like, "No man, it's COOL. It's not illegal to set shit on fire in a bar?" That is three points for Colorado, and a sign that Boulder really is chill because you might get beaten unconscious by bouncers for that in most other cities.

CINCY IS JUST BEING BIG EAST ABOUT THIS. One point for a small robbery in a dorm, but kudos for Akise for being elusive enough to sneak in and out of dorm rooms without detection.