Offering up reactions objectively gets you nowhere on the internet. More than ever, consumers demand not only instant response, but customized instantaneous response tailored to the emotional needs of specific fanbases and demographics. We at EDSBS seek to provide this for you every day, 365 days a year minus holidays, vacations, and occasional days of weeping on the floor for no reason whatsoever.

BIG TEN MEMBERS OUTSIDE OF MICHIGAN OR OHIO STATE, AND MOST ESPECIALLY WISCONSIN AND MICHIGAN STATE FANS. 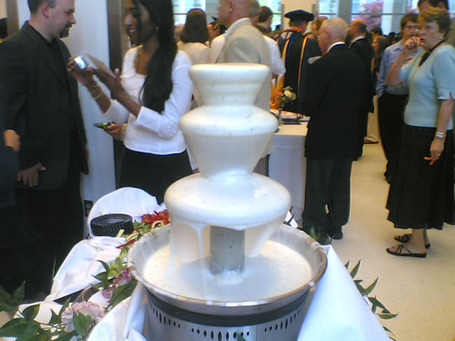 We believe those Midwestern values endure today in the work this conference does both in the classroom, and on the field. Sure, it might behoove us to cut corners on the field, and to disrespect our partner institutions by violating some of the grand unwritten traditions of this conference. Some conferences have a three day media extravaganza, while we have ours in a single day of hurried mumbling. Some conferences play their games at night under lights, while we prefer the rolling gray skies of November to light our contests. Some conferences will sacrifice everything for football success, even at the cost of funneling funds otherwise earmarked to educate their worm-ridden, illiterate children and pushing it instead to a newer, bigger weight room or facility for their football program.

Some conferences are full of racist assholes who are not smart. We would never name names. That's just not something we believe in, or ever will.

It's not that we are better than other conferences. It's that our values are better, both in that we have them, and that we can cite them from thin air when needed because no one ever writes them down. This allows us to feel superior no matter what happens on the football field, and even if we have absolutely no understanding of the situation at hand, or its details, or even what the rule may or may not be.

The Big Ten is about respect. And one school won't change that, even if that school happens to be our biggest market, most successful team, and the most visible representative of our conference on many fronts. We are gentlemen. Gentlemen who abide by gentlemen's rules. You either understand this, or you do not.

If you're from Big Ten country, you probably understand this from birth, because being born somewhere imparts certain things from the virtue molecules in the dirt or something we don't know you should really edit this part before we send it out Jesus writing this crap is tiring but they eat it up like so much cheese dip sprayed from a firehose.

I dunno. What do you think, Urb? 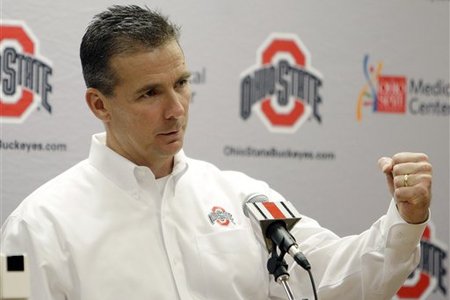 THAT'S RIGHT BITCHES GRAB THAT URB-CRANK AND GIVE IT A TUG. Maybe you'll get some divine inspiration from touching the lingam of Recruiting Ram himself. Maybe you'll learn how to shut the door on TCU in a bowl game. Maybe you'll find another fatass running back three tortilla chips and a Mountain Dew Red from diabetes. Scratch that: YOU ARE TOTALLY GOING TO FIND ANOTHER FATASS RUNNING BACK THREE CHIPS AND A CODE RED AWAY FROM DIABETES.

That's okay, because Urban doesn't want your running backs. He wants your heart. Mostly because he needs a new valve or something, but that doesn't matter because Urban is out-recruiting you with a baboon's heart he got on loan from a Dayton organ bank. It's only gonna get worse when he gets a real human heart in there, Bret. I'd wash the sand out of your penis wrinkles and get to work.

I said penis wrinkles because vagina is sexist, and anatomically inaccurate. Much respect from Buckeye nation to vaginas. They gave us life, and help us recruit awesome athletes, and since that includes Greg Oden I think the toughness of vaginas can't really be an issue here. You can't spell "Ohio" without two of them on either end, so shouts out to the big V. All love from C-bus, baby.

But a "Gentleman's agreement?" You want some gentleman's agreements? Here's one. DON'T RUN UP EIGHTY ON INDIANA AND THEN COMPLAIN ABOUT BEING A GENTLEMAN. How's that to start? Don't lose when Kirk Cousins throws up a prayer and your DBs are so unathletic they sit and wave like toddlers hankering after gummi bears on the shelf while the other dude brings it down. How about not going for two when you're up by seventy million points? How about something for that rosacea? Or try not falling asleep after drinking a 12 pack naked in the tanning bed FOR THE SEVENTH MONTH IN A ROW.

I have a list of other gentleman's agreements. It's pretty thorough. You'll hate it.

By the way, the day you find a way to pitch Seasonal Affective Disorder and DUI as a recruiting bonus, you're so golden, bro. You go have fun in your little MAC expansion league with Danny Hope. We'll be pulling this boat with our teeth while you sit on the Lido Deck and punch Indiana in the balls to feel better about being a pitiful guest on our boat, The S.S. Big Ten Is Owned By Urban Meyer's Mind-Dick With Woody Hayes Pissed-Off Hellghost Pushing.

But at least the bar's open, Bret. Wisconsin's undefeated there, I hear. 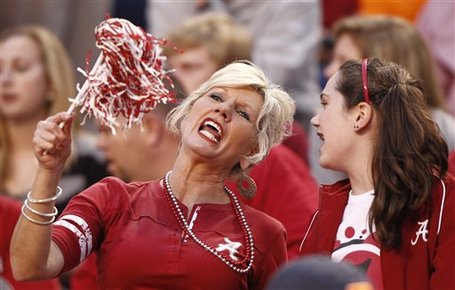 THEN HE GOT THE MONKEY HART

THE CIRCUL ARE COMPLETE

THIS LEAGUE AIN'T BIG NUFF FOR US PAWWWLLLL

WE OWN 'EM ALLLL PAWLLLl

WE GONNNA PUT SABAN ACOLYTES IN ALL THA LEEGUS

THE WACK 12 GONE GET GENE CHIZBITCH