The College Hall of Fame exists. We are not sure why, but it does. The reasons seem to be a kind of advanced real-life troll job on those who watch the sport. Tommie Frazier, the best college quarterback we ever saw, is not in the Hall of Fame. Howard Schnellenberger, whose lifetime winning percentage is below the mandatory 60%, is not eligible. These two facts alone invalidate its existence.

There is the issue of it moving from South Bend, Indiana to Atlanta, Georgia. Suck it, horrible Midwestern place. This is the only purpose the CFHOF has ever served.

Well, that and recognizing the achievements of its most unheralded member, 22 "2" 22222, found by Run Home Jack on his tour of the CFHOF's site. 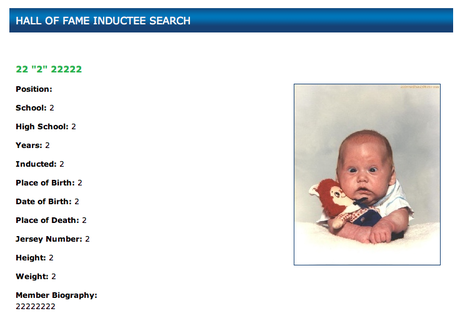 TONY CASILLAS: "Oh man, he loved that Raggedy Andy. I remember we were staying at a hotel on a road trip one year, and there were a bunch of old people there on some reunion or whatever. Anyway, this place caught on fire in the middle of the night, and 2 went charging in there. We thought he was dead, but he came back out twenty minutes later holding that damn doll. I think like six of those old people never got out."

NELSON MANDELA: "He was instrumental in our 1995 World Cup. Matthew Damon's portrayal of him in the film Invictus was adequate."

WARRICK DUNN: "He'd play through anything: injury, partying, family trouble. He'd be out there crying with his pants full of shit, and he just kept going. Most two year olds do this, but not while running in his fourth TD of the night against a Jim Caldwell Wake Forest team."

NETSCAPE: "We were so close. We'd search for 'X-Files fan-fiction together. He liked the funny stuff, not the sick shit involving aliens and Gillian Anderson. He used to point at my little cascading search icon. Then he left me for Internet Explorer. [shakes head] Internet. Explorer. I still can't hear the static and beep of a dial-up without thinking of him, or that little onesie he wore everywhere. I'm sorry, this interview is over."

HINES WARD: "He's a cheater and a bitch and that's all I have to say about it."

PETE SAMPRAS: "You know, I always felt like I couldn't be friends with a football guy. We just approach our games in such different ways. But I've told 2 things I've never shared with anyone else."

PETE CARROLL: "I still can't believe the NCAA stripped him of all those records. It's not like a birth certificate helps you get six sacks and two fumble recoveries against Miami. Was his birthday really "2?" I don't know. But when I looked in his eyes, it didn't really matter."

NICK SABAN: "He only wanted a two year scholarship, did not understand money or numbers, and responded to spanking and yelling. Then and there, he became my favorite player ever."