FROM A BOY RAISED ON SKYNYRD AND A DAILY DOSE OF HEALTHY ASSKICK. 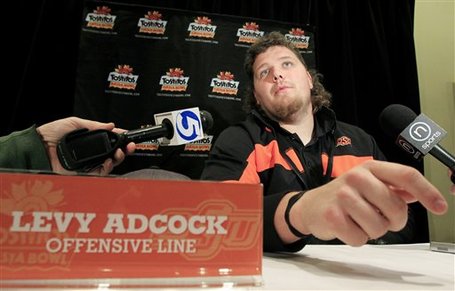 You had that helmet on all these years, so maybe we didn't fully appreciate the mullet on you, Levy Adcock of Okie State. But by Jove, just look at that Cowboy Cape back there, an explosion of raw country masculinity that would make Rick Muscles rack his bar and salute in shirtless respect. (Then again, his coach is a master of these things, so he's probably just reflecting well on his mentor.) Despite being on the precipice of making a good sum of money, please do not ever hire someone to "properly" cut your hair. It needs no improvement, and is already perfect.

IN OTHER MOMENTS OF LOOKIN' REAL SMART. Robert Griffin III is so fun to watch here because he's obviously delighting Steve Mariucci, long one of our favorite NFL coaches and stress-eaters, but also because he sees the play quiz and distraction coming the minute Mooch launches into it.

Try to remember the play yourself: it's a variation on the Drive concept, something that worked its way from the West Coast offense into the Air Raid playbook and beyond. Griffin aces it both because he probably already knows it, and also because he's smart and brilliant and fun and now we're just mooning over him like everyone else does. (Scouts: BUT IS HE TOO GOOD A PERSON AND TOO FAST TO BE GOOD AT FOOTBALL? There's actually a piece basically making this argument by a very large columnist, but we're not linking it because he is horrible.)

HAHAHAHAHHAHAHAHAHA, PT. 1 Of course Nick Saban is happy to do this. He's beaming!

HAHAHAHAHAHHAHAHAHA, PT. 2 And this seems totally implausible given the upright financial dealings we've heard of in the past couple of years involving coaches.

Again, do not ever trust anyone from the state of Alabama about anything ever. Ever. Ever. Ever. At least Louisiana fraud will get you a good meal and a treatable STD for your troubles.

MORE ON THE DREADED TV DEAL. The SEC really does have the third best tv deal for the moment.

GLAD THEY FIXED THAT. LSU's tiny bandbox of a stadium will finally receive the expansion it so badly needs. Now, to the important issue of making teetotaling Tiger fans consume at least some alcohol during games.

QUICK NAME ONE WISCONSIN QUARTERBACK ON THE ROSTER. You probably can't, but that's cool. You've got Bruce Feldman to do that for you, since he's just reviewing all these anyway. "Wes Lunt", a live-armed early enrollee, could end up getting a good run at the starting job, and with a name like "Wes Lunt" in Stillwater he totally should since that's like one of the most North Texas things we can imagine.