FULMER CUPDATE: THE SEC EAST IS DEEP THIS YEAR

Share All sharing options for: FULMER CUPDATE: THE SEC EAST IS DEEP THIS YEAR

Brian the Boardmaster, fellow dragger of the sainted man-plumbing along with Reggie Nelson, cranked this out early this a.m. despite his morning ablutions. They take three hours, two hours and 45 minutes of which are spent on the Alabamian Pipeline itself. Enjoy? 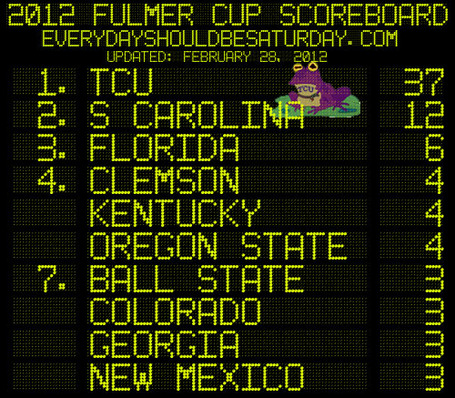 KENTUCKY LEARNS A VALUABLE LESSON. Holly insists this lesson is that you never leave your drugs and your money in the same pants, and that's perfectly valid to those unfamiliar with life on them skreets. But if you've done some hustlin' yourself, you know that the game requires you to carry both on your person at all time. In the immortal words of Jay-Z:

But it's real like we grievin for Aaliyah with the masses

I feel her soul when the Lee passes

When the wind blows, it's almost like I see her in the Hamptons...

That has nothing to do with drug dealing, but it does remind you that R. Kelly and Jay-Z made not one, but two albums together. You might think you have stupid dreams, but let us assure you, you should pursue them because they cannot be stupider than Best of Both Worlds and its even more half-assed sequel, Unfinished Business. Go forth and try dumb things. The floor has been established, and it is both firm and definitive. (Both men are wealthy and alive today. You'll be fine!)

Our other lesson from Kentucky linebacker Ridge Wilson's arrest for felony trafficking of Xanax is this: Ridge Wilson is the easiest perp ever. He immediately mentions he's a football player, which while effective in some places as a free out is nothing close to that in hoops-mad Lexington. (Or, um, in Louisville, where he was arrested.)

Wilson then consents to a search, which you should never, ever, ever do without dragging the process across every constitutional speed bump possible. You're just playing the odds at that point that something more serious will happen, and the cops will have to leave, but make them jump through the hoops they're supposed to jump through while you're at it. Much like playing hard in a likely loss, you're just hoping for a fumble and a break, but they do happen.

He was selling Xanax, and for that felony trafficking charge you get three points. A bonus point for failing the "how to get arrested test" is added, and takes Kentucky to four points in the Fulmer Cup.

ps. Holly says "aw, man, I totally whiffed on a "Morgan Newton probably was sitting in the passenger seat but fumbled that other pair of jeans into the back." Yes you did, but now you haven't. INTERNET!

SOUTH CAROLINA STEPS TO THE REAR (BECAUSE THEY ARE TAKING YOUR CREDIT CARDS FROM YOUR POCKET. John Angelo Watley, a South Carolina freshman linebacker, is an outgoing young man. He is so outgoing that he allegedly decided to visit two young people in their apartment while they were asleep in Columbia at 7 a.m. on a Sunday morning, take a MacBook, an iPad, and money, and then get caught on the spot just so he could meet new, exciting people from the Columbia Police Department.

He did hang around, and that's how he got three charges for his alleged excursion and subsequent incursion into someone else's house: second-degree burglary, grand larceny, and financial transaction card theft. All are felony charges. Each is worth three points, and with a bonus point for his pleasant mugshot the total comes to ten points.

South Carolina now stands in what is at least a feasible position to work through a series of small but persistent incidents up to some kind of challenge to TCU. Failing that, they could at least claim a solid advantage on the Salutatorian spot, the only real drama left barring a serious offseason of mayhem in Columbia.

In summary: the SEC East is deep in the Fulmer Cup this year, and will be considered a favorite over the West in something besides basketball in 2012.