(As you've all seen by now, SB Nation is launching an all-out video attack on you, the unsuspecting offseason populace. Many of us pitched proposed shows to our Illuminati overlords. Some were selected for production. Others, like this question and answer show featuring myself and Luke, were not. We present the transcript of our NEVER BEFORE SEEN pilot for you below.) 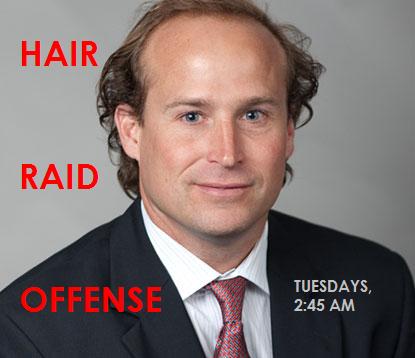 RHJ: Hello, and welcome to AIR RAID OFFENSE, the show where two unqualified jackasses answer your questions about anything and everything college football by making fun of B2K.

Luke: Let's get started with our first question, shall we?

RHJ: Ok, this one comes from Matt D. in Panama City, Florida. Matt asks "With the departure of West Virginia from the Big East this season, who do you think is poised to step up and win the conference?"

RHJ: True that, Luke. Next question, sent via Twitter from @runthedive. "Jack and Luke - how long will it be until we see Nick Saban working around new oversigning rules by forcing the swim team to offer a scholarship to a four star defensive tackle?"

Luke: The question's asked in the spirit of humor, but I do worry that we're already starting to see the spread of some less than savory tactics in the Big 10. Already, Ohio State's lowered the bar on the entire conference's academics by admitting thugs, sex offenders, and idiots who otherwise couldn't qualify for admission to a major college. They'll never have the caliber of minds like Ryan Mallett and Tate Forcier. Michigan fans are right to shame the Buckeye football program for hiring a noted pathological liar, bad father, and emotionally manipulative husband. Theirs just eats a baker's dozen boxes of savory parmesan bites and freebases whole milk to get up in the morning like a real American should.

RHJ: There's a lot to unpack there, but, um, let's try to address these questions and not just bash one school. Here's a great one, from Lisa T. Lisa asks "Lots of people seem ready to put USC in the national championship game, but do you think the Trojans have what it takes on defense to go all the way?"

Luke: My favorite of Junior Hemingway's work was "Move Your Feet For Whom the Bell Tolls."

RHJ: Seriously, we talked about this. This show has to be more than just you going nuts abo-

Luke: There's nothing quite like mocking Ohio State academics then spending your parents' savings on a law degree you'll use to write 6000 words on a false paradigm as to why Jay-Z's moving the Nets to Brooklyn will create an inauthentic fanhood that can never live up to the authenticity that being a New York Knicks fan from Springfield, Missouri who got a John Starks jersey at your bar mitzvah creates.

RHJ: (sighs) That's all we have time for on this edition of Hair Raid Offense. Tune in next week when we look at some of the biggest position battles going on around the country.

Luke: MICHIGAN FOOTBALL — BECAUSE THERE'S NOTHING LIKE VICARIOUSLY WEIGHING YOUR SELF-WORTH ON BEATING A SHITTY RUNNER UP ACC TEAM NO ONE THOUGHT SHOULD BE IN THE BCS AND FULFILLING A LIFE GOAL OF OWNING PROPERTY IN WEST BLOOMFIELD CHARTER TOWNSHIP, MICHIGAN