Brian the Boardmaster whipped this out before he whipped it out, spun it around his head four or five times, and took off using a helicopter-like motion as a form of transportation. This is called the Reggie Nelson Sikorsky, and this update is brought to you by no one but those who vigilantly watch over the Fulmer Cup. Enjoy. 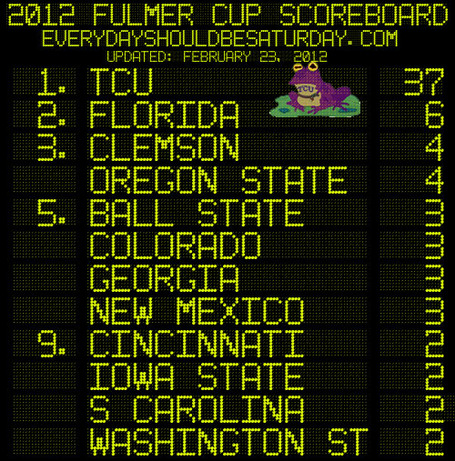 OKAY, HERE'S THE TCU SCORE. Finally, after much combing through of affidavits, the point total for TCU's weed bust is 37 points for all offenses. That's 11 felonies, three misdemeanors, and an almost cheeky bonus point dropped on top for a capper. The code regarding selling drugs in a school-zone really gets you, guys. It does every time.

This places TCU in an outrageous lead for the moment, but remember that we're just one ill-advised group activity away from someone threatening their admittedly huge lead early in the Fulmer Cup. For the moment, second place seems to be the crown everyone else is scrambling for as TCU floats high on their own cloud in first place. #phrasing

FLORIDA RECEIVES SEVERAL UNFORTUNATE BONUSES. Florida TE A.C. Leonard got into a fight with his girlfriend and earned himself a misdemeanor simple domestic battery charge. The fight allegedly included Leonard pushing the woman back into a dog cage, and then dragging her out of the apartment by her hair. The Florida bonus kicks in here, as does the "Hitting girls" bonus point, so three points fall Florida's way, and this is horrible and if true he should be gone from the team and do we even need to be saying this? Sadly, we probably do need to say it.

ACROSS THE STATE, CHIVALRY IS NOT DEAD AT FLORIDA STATE. James Wilder, he of the eye-popping high school recruiting tape and large thighs, tried to keep his girlfriend from getting arrested on a warrant for failure to appear. First of all James, this is in theory quite gallant, but misguided as the cops have tasers and other bad things, and will use them on you with a sometimes unreasonable quickness. Two, we're sure the cops are overcharging you here, and since you were being so chivalrous, we'll award just one point instead of a possible two and make a wanking motion at the Tallahassee Police Department.

(But seriously, just tell her you'll pay her bond and see her at the jail. In the end, it's the loving thing to do. Also, your lady should keep her court dates, because that's both keeping it real and keeping it real classy.)

OREGON STATE IS JUST TRYING TO KEEP UP WITH CLIFF HARRIS' EXAMPLE AT OREGON. The in-state battle between the two schools only intensifies as Sean Martin, Beavers DB and amateur rally car driver, takes police on a 104 mph chase and wisely decides to pull over and take his DUI and eluding police charge. The DUI is two, the eluding charge is a misdemeanor, and the bonus point lets you know we see what you are doing, Sean, and are impressed in a kind of aghast way. Four points for the Oregon State Beavers in the Fulmer Cup.

BRAWL STATE GETS ON THE BOARD. A relatively minor bar brawl, at least, since the standard for all brawls is the 2010 Bar Knoxville tussle that left an off-duty police officer KTFO'd in the middle of the street. This is just two Ball State guys getting in what appears to be a simple bar fight and earning two misdemeanor charges in the process, but perhaps we're jaded. Okay, we are completely jaded at this point by a simple barfight, but it's still worth three points once you award a bonus point for barfighting, and the scoreboard does not recognize "jade."

WASHINGTON STATE SHOWS GOOD BURST, LACK OF FIELD AWARENESS. A rarity of rarities, the long-snapper arrest, earns a bonus point before we even get to detailing the charges. File this under "drunken athletics," or "Why more sporting events do not feature whiskey as a performance beverage."

Pullman Police spokesman Cmdr. Chris Tennant said police received a complaint of a person throwing rocks at the Pi Kappa Alpha fraternity house at about 12:31 a.m. Sunday. Koepp was seen in the area when police responded, Tennant said, and fled on foot before slipping in the mud and hitting his head on a metal grate covering a gas meter.

This kind of tipsy capering and obstruction of a public servant is worth only one point by itself, but the bonus point takes this to a two point score for the Cougars.

IOWA STATE SEEMS BORED. Stealing an iPod and possession of a controlled substance? Permacloud madness has hit Ames, and hit it hard.

KANSAS STATE ENJOYS A FURIOUS SINGLE POINT. Allen Furious Chapman, Kansas State DB, earns one point for driving on a suspended license. The real upside is knowing his fantastic middle name, not the thing you probably got busted for at least three times in college if you had problems like we did with properly filing paperwork.