WAR DAMN POWER TOWEL. You shouldn't be allowed to put that much raw animal attraction in one photo, and yet: 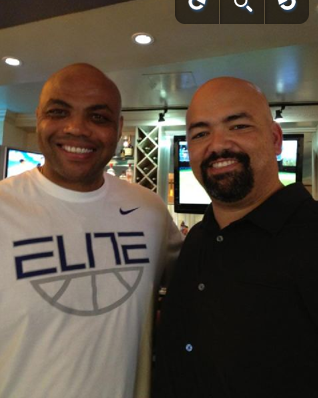 (Via @petegaines ) If Charles Barkley joins Ron P and Sly Croom on the staff of the Jags, we will move to Jacksonville to be part of this magical assembly of lumpy mystical coaching stones. If you put them all in the same place, a Pokemon that looks like a 7-5 bowl team appears and fumbles a turkey into your lap!

MORE MEETINGS TO EVENTUALLY CONFIRM THE PLUS ONE WE ALL KNOW IS INEVITABLE BUT MUST NOT CALL A PLAYOFF NOPE. Old guys confer, confirm plus on en route basically, old writers grumble how this whorehouse will never be the same, blah blah, this sweatshop was so much more authentic when they didn't have air conditioning. This reminds us of when people said Southern writers lost their imagination when we got air conditioning, because yeah, it was so much better back when there were like 8 bowl games and coaches could give their kids rhabdo without fear of someone saying shit about it. OMG THE WORLD'S ENDING! It always is for some people.

IN SLIGHTLY RELEVANT NEWS. Knock us down with a feather.

FULMER CUPDATE INCOMING. We'll have a Big Board up today, but let us say that after pushing a cop in the name of protecting his lady, James Wilder now may have the choice of Tallahassee ladies for the next five years regardless of on-field production.

JUST WATCH THIS BEFORE YOU WORKOUT. You won't have Giavanni Ruffin's rippedness, or talent, or My Morning Jacket warming up in rehearsals behind you, and you probably won't be jumping a fence back and forth like it's a foot-high plyo box, but it's still very motivational (until they mention that stupid shit about sleeping.) (Because people who don't sleep are actually functioning mental cripples.) (Viva sleep.) Via reddit/cfb.

OL STANFORD JIMMY'S A MAN OF THE PEOPLE. Hoooweee, ain't he, with his crushin' handshake and all. The Stanford Harbaugh legacy remains, if this video is any evidence of the"only talk shit on the sidelines, but do it HARD, son."

MAN, WE DON'T EVEN KNOW IF THIS IS SCIENTIFICALLY POSSIBLE. There might be real points here, but any analysis of Michigan's offense in the Rodriguez era seems strained by the crushing weight of Greg Robinson's astonishing failure to do anything on defense. We mean anything. Anything at all in any sense of the word. They couldn't even die right. It was bad. You might remember it. You might not if you just drank yourself blind off rubbing alcohol. We're kind of just stroking out thinking about how much money Greg Robinson stole in the 2000s. Thus. The. Short. Sentences. Stopping.

FOOOOOOOOOD. ATVS has a simple and awesome gumbo that you can make on Saturday because you have nothing else to do. :(

MIKHAIL PROKHOROV ON THE MICROPHONE, ETC. Please, you cannot move another inch without watching Mikhail Prokhorov take the mic. The Hater's Guide to the Academy Awards contains several Kenneth Branagh jokes we contributed since we may be one of the five people on the planet who can't fucking stand Kenneth Branagh. (Everyone's got job skills.) People living alone are like parents with toddlers, but without the toddlers, and the NYT continues to do an amazing job chronicling the pampered, lonely, and hopelessly narcissistic asshole segment of the human race. Porto bein' bitches. Monday Night Football really should have featured more Cossell-as-tornado scenes. Daytona was so much realer back when driving in the ocean was a live possibility. If you're going to apologize, it is probably important to remind everyone that you're a fantastic humanitarian, too. (Not really at all.)