Share All sharing options for: LET'S NOT PLAY THIS GAME, OHIO STATE 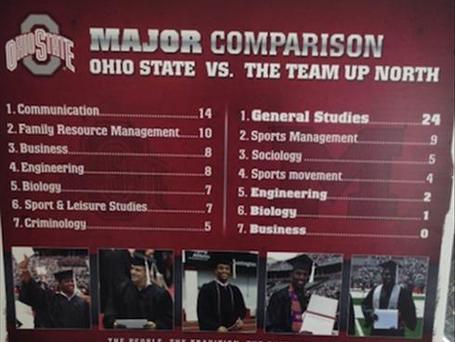 Most of the debunking/debate has been done on this already, but let us add this: you do not want to play this game. Not you, Ohio State, and not you, Michigan, and certainly not anyone in the SEC. Forget the quality of the majors for the time being and embrace the sound, and how bad they will look in comparison to others' real majors.

What do we mean? We mean that every academy school gets to say, "I major in Killing Studies." There might be variations of this. You could major at "Killing people on land with my bare hands," or "Killing at Distance With Missiles," or even "Killing Services Support." At the end of the day, you all lose this fight to each academy, because their majors are all some wrinkle on "Defending Your Lazy General Studies/Communication Ass With High-Powered Weaponry And Shocking Amounts of Provigil."

Stanford and Vandy also trump this with "being wealthy," their code major. Appalachian State's "Four or five foggy years of straight chillin'" also beats any major offered by Michigan, but [OBVIOUS JOKES ARE OBVIOUS.] Florida, for the record, loses this game because "Sweating And Fighting With Landlords While Eating Burritos" is a path you choose on your own, and we wouldn't make that kind of spiritual choice for anyone. (Hawai'i's coded major is "Hawai'i," and yeah, we all lose again.)