Part One of our close examination of The Program is here. Part two begins below. 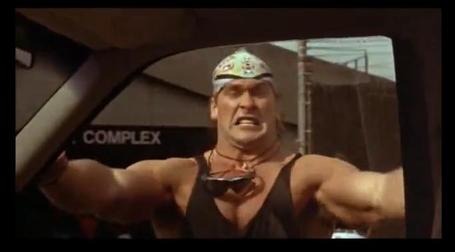 35:15 As Mr. Hall and I pass the thirty minute mark, The Program continues to remind us that steroids will ruin your life by helping you become a starter on defense and making you impervious to pain. This scene was actually a shot for shot remake of home video showing Bill Romanowski celebrating a Scattergories, Jr. win over his nephew. Is smashing a window with your head for no reason something only an SEC player would do? No, but suffering no legal ramifications for it certainly is. (SEC +1) -- RHJ

(2) Exfoliation is a private affair. We are not one to determine how and where you do it, Lattimer. You do it however you need to do it. (Fleet Week! Remember! It's coming soon, girl!) This was shot in Columbia, South Carolina, where cars with smashed windows are so normal the only unusual local response to this scene was "Well look at those fancy people with their unsmashed windahs. Serves 'em right." Then they returned to their piles of burning tires and bingo parlors, the world restored to its proper axis again. (Columbia's not like that at all, he said, lying his ass off.)

Steroids are bad, and that's why this looks like so much fun. Remember that, children. 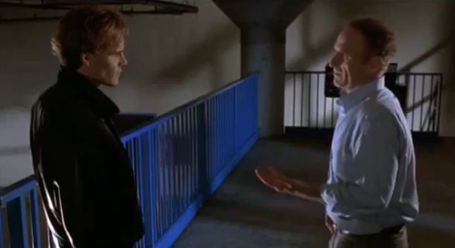 James Caan walks around in most of his movies like he's just been stabbed in the solar plexus, and yes hahaha that's always kind of our favorite James Caan gag, because watch him limp! It's the most intimidating limp in all of American cinema, and that includes Rudy Ray Moore and the AT-AT. They both lose to fights in James Caan in every simulation we have made, and do so badly.

Yet we cannot move on without noting that in this scene, Coach basically steals Joe Kane's motorcycle. For his own good. Takes it for a spin. To the dog track. Where he exchanges it for some tips. Loses big. Has to fight a bookie and some fake muscle to get out alive. Flags down a trucker. Talks him into stopping by the liquor store. They split a bottle of Glenmore Gin in the plastic combat jug. You know, the one with the handle. This is his new offensive line coach though he doesn't know it until the next morning when they wake up in a bank with sirens blaring outside. They sprint out the back and hide in the woods for a few hours. Typical Caan Thursday.

Seriously, though. James Caan stole this motorcycle and threw it down an elevator shaft. Why? Who's asking why?

This is supposed to show that Alvin Mack is smart, but not book-smart. This will later become the salt-shaker scene in The Blind Side, which really happened and OH GOD OUR SOCIETY IS A COMPLETE FAILURE---

It's not like calling out your assignments against a Jackie Sherrill offense was that hard. They ran like five plays, and one was "Wayne Madkin breaks contain and does stuff." Simple, and completely unblockable when they started running downhill, but not the intellectual litmus test. Oh wait we're sorry David S. Ward . You go right ahead and fly this plane, Alvin Mack. It can't be harder than your assignments in a 4-3 against a 1992 paleolithic offense. WE'RE GONNA BE OKAY, PEOPLE. ALVIN MACK IS FLYING THIS PLANE.

(Also: "kill everybody" was Vontaze's whole playbook, and that did not work out for him at all.) --OS 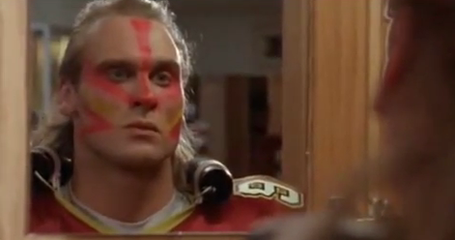 The natives are restless--SAILS ON THE HORIZON, BOYS! So many of Lattimer's problems are solved by a closeted homosexuality plotline, except the one where he gets confused about which team he's playing for and starts putting Florida State war paint on his face. Yeah dude but I'm 1/32 Cherokee. Why yes you are, snowflake. Here's a dreamcatcher and a copy of Thunderheart on DVD. --O/S

37:04 Lattimer and Alvin Mack spit into each other's mouths. #fleetweek--O/S

39:28 "L'il Poo-butt motherfucker" better be a blitz package name somewhere in this wide world of football, or we have all failed. Alvin Mack yelling at a terrified running back is one of the few moments in the film we actually believe, or at least forget we're watching The Program and just let Alvin Mack go bonkers envisioning the man who shot his mother. (Who is alive, but viva la visualization.) "I'm gonna bust your gut open and watch you die." Yes you are, Alvin Mack. Double bonus points for the cutback annihilation by Lattimer.--O/S

39:44 Most sports films - and this one is, by and large, no exception - take a number of liberties with their subject game for purposes of economy and drama. But we must tip our hats to the writers here, for there is no more accurate portrayal of Jackie Sherrill era Mississippi State than to have the first two plays of the season be 1. a turnover lost by the Bulldog offense and 2. a touchdown immediately given up by the Bulldog defense. -- RHJ

41:15 Thus concludes the only thirty seconds of cinema ever devoted to the thankless work of being a lineman. "Nice pass. Wish I'd seen it." There is a lot of necessary concision here, but The Program does attempt to actually show everything that goes into a single play. This is why football generally makes lousy movie material: it's hectic, contains 22 moving parts at any given time, and can't be isolated into the kind of one-on-one matchup that makes baseball and boxing scenes so camera-friendly.

You have three choices. The Replacements takes the QB-friendly approach, where he's this Byronic hero getting hammered by faceless hate-beasts. M*A*S*H just shows outright chaos, shit-talking, cheating, and ends the football game with a center-eligible play. Naturally this is our sentimental favorite, right down to the quick cut to the lineman pre-snap yelling "Alright, bub, your fucking head's coming right off."

It also makes no attempt to explain what is happening, something only The Program has really attempted. We now return to making Fleet Week jokes. --O/S

42:38 ESU closes the door on this game when Lattimer gets a sack by bear hugging the quarterback's face. 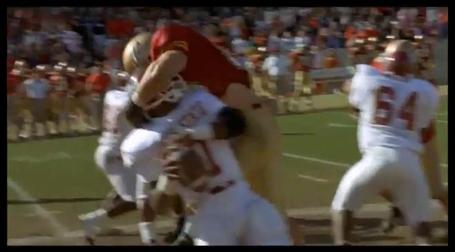 No flag is thrown. PENN WAGERS LEARNED IT FROM WATCHING YOU, MOVIE REF. (+1 SEC). -- RHJ 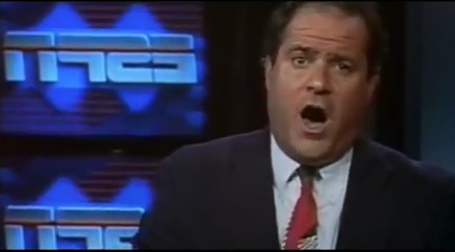 INVISIBUL NUTRISYSTEM DICK. Hasn't aged a day, we tell ya! It's reversed, because in this world Chris Berman is on the television and you are not throwing large bolts and scrap metal at your screen. --O/S

43:42 ESU players are required to wear jackets and ties to the victory banquet so that boosters have somewhere to stick envelopes of cash. Have you ever tried to subtly slip a hundred bucks to man wearing a leopard print vest and no shirt? This scene is important for one reason only: it gives us one of the greatest credits in movie history.

Many actors have mastered the roles of Othello, Willy Loman, or Brick Pollitt. Only one has dared to become FAT CAT ALUMNUS. -- RHJ 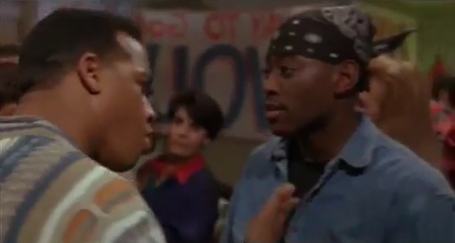 The Cosby Show is ALL up in your face, Menace 2 Society. Let's just watch David S. Ward rock the fuck out of this moment of deep African-American cultural understanding, since he's got two-thirds of the 1993 white dude's handbook on screen right there, and the other third off-camera just Different World'in' in a sweater made for a 280 lb man. Remember, this is before Ice Cube made movies for 45 year old housewives and conquered racism. It was a good day when he did that, and we thank him for it.

Trent Richardson and Mark Ingram once had this exact fight over an Dodge Challenger full of three-piece suits CLAAAAAAYYYYYYYYY TRAVIS. --O/S

49:52 Let's imagine for a moment that one of Urban Meyer's daughters is attending Ohio State. Further imagine that Joe Bauserman has been granted an additional year of eligibility. (HI LUKE.) Now say that daughter is threatened with expulsion for helping Bauserman cheat on an exam. Would Meyer callously allow her to be thrown out of school without any protest?

The answer is Urban Meyer doesn't know what his children look like and certainly wouldn't allow them in his office in the first place. -- RHJ 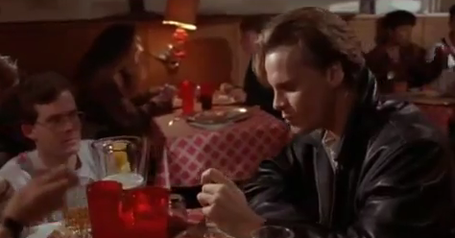 Back off, legless Stephen Colbert. Joe Kane's got two pitchers of beer and some Heisman-grade Ziti to work through before he's finished with his short film, Sullen Minutes At A Fazoli's. No one uses opaque red plastic cups in the future? I don't believe a word you say, Colbert. Not one bit of it. --O/S 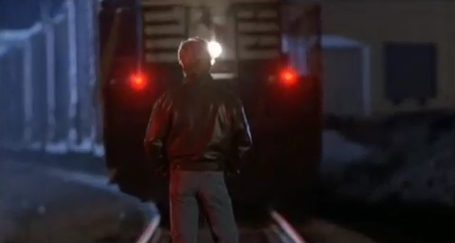 "It's okay, honey. Charlie Weis was my offensive coordinator my freshman year. This is nothing." Joe explains that the Kane family are "just a bunch of drunks and fuckups." We would suspect Joe Kane knows little of the SEC's history, because this makes him perfect SEC quarterback material. Hey, a football scene's next! Hello, split backs set. We see you so rarely these days. --O/S

58:47 Bo Schembechler cameo! This is actually the coach's second movie credit; he also played General Kael in 1988's Willow. This scene takes place right before the final battle, in which General Kael's forces fall to Arizona State in the Rose Bowl. 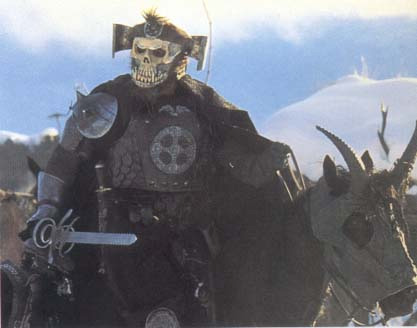 Would Bo be calling an SEC or ACC game? Yes, but not without eating unshelled walnuts out of spite. (B10 +1) -- RHJ

59:34 Joe Kane runs in a touchdown to put ESU ahead of Michigan late in the game. Joe Kane is a running quarterback despite having the build of Johnny Weir. Is The Program just an elaborate excuse to inflict tremendous amounts of pain on Craig Sheffer? We've got a little less than an hour left to find out. -- RHJ

Also, a running quarterback devastates a Michigan defense. That is all.--O/S

SUMMARY: An hour into THE PROGRAM, ESU is looking more and more like Peach Bowl material in our Which Conference Is This Team In Chart, as the SEC and the Big 10 are tied with 4 points while the ACC is stuck on 1.