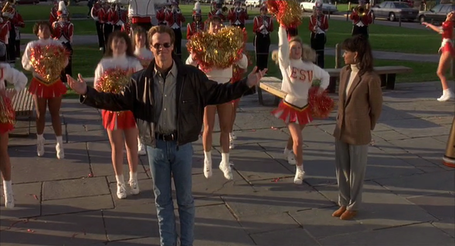 0:00 The Program begins as so many classic football tales do - with a Georgia Tech late-season victory! (This, perhaps, was the filmmaker's way of telling us to leave our collective rationality at the door.) Within three minutes, we learn that Eastern State University's loss has kept the team out of a bowl game for the second consecutive year, and members of the press openly speculate that twelve year veteran Coach Winters may not be around if that streak extends to a third.

For the sake of simplicity, the candidates are the Big Ten, the SEC, and the ACC. Playing the Yellowjackets seems very ACC, obviously, but wait! Georgia plays Georgia Tech as their last game and was doing so in 1992, the season in which this game takes place. (SEC +1)

On the other hand, even in the smaller bowl universe of the early 90's, missing out on the postseason two years would mean getting tossed out on your ass in the SEC. Unless you're Gerry DiNardo. This "hey we better have one good season out of three" sounds decidedly ACC or Big Ten to me. (ACC +1, B10 +1) --RHJ

0:20 This is the play-call Joe Kane narrowly misses on in the opening scene. 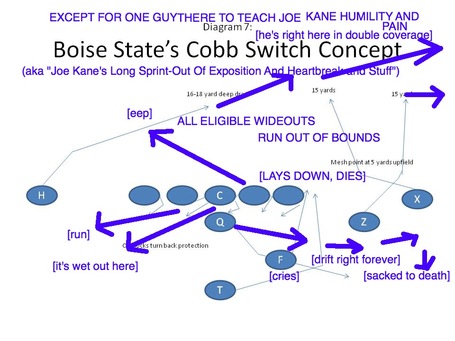 The linemen running away and off the field is important, but Joe Kane's sideways 18 yard drop is equally crucial for the execution of this play. There are rumors the makers of The Program used Florida State as a model, but his sprint-out concept is both a.) too complex for Jeff Bowden's offense, and b.) predates him by a full decade. Joe Kane is sacked 83 times in this movie and should die halfway through the film. --OS 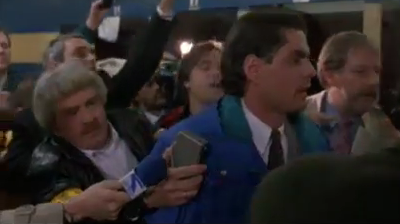 These reporters ask Winters what he's going to do about getting threats to compliment Joe Kane. No reporter in a postgame situation has ever asked that specific or pointed a question of a beleaguered coach ever, but then again, this is a press corps with Bob Keeshan wearing a Prince Valiant wig and a 1988 floor trader in their ranks.We won't pretend to know what they're capable of, or assume that they're not all high on cocaine. This was 1991. They are all totally high on cocaine. They will need it when they have to all run to the same phone to file their identical stories.

Later, they will complain about bloggers because things are not stupid and full of cocaine like they were in 1991.--OS

3:12 Recruiting trip! Winters has two assistants throughout this movie, as seen below. 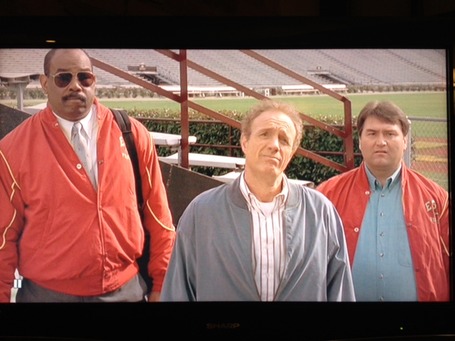 These two guys never really get names, so, purely for reference purposes, let's call the coach on the left Gene Smith and the one on the right Terry Bowden. Gene Smith plays the role of Coach With A Conscience Sort Of But Is Generally Ineffectual And Hey It's Out Of My Hands. Terry Bowden plays the role of Doggone It We Can't Know What These Kids Are Doing So Probably Everything Is Fine Have Some Pecan Sandies. (B10 +1, SEC +1).

Off they go to woo Darnell Jefferson, who is also being heavily recruited by Michigan. A reverend is involved, for reasons that are best explained as "shit we better include at least one adult in this movie who isn't totally awful."--RHJ

3:18 The clarity of James Caan's dialogue in this film is astonishing, but less so when you realize he is not only phoning in this role, but doing so with a laziness bordering on ferocity. "Caan to Tokyo, come in Tokyo?" Loud and clear with fiberoptic clarity, Mr. Caan.

He also appears in many scenes wearing schlumpy windbreakers and flannel shirts no coach besides Rich Brooks on holiday has ever worn. They do look like James Caan's clothes, though, as if he strolled onto the set, did not even bother with wardrobe, and said "Fuck it, let's roll" while threatening the crew with a switchblade in one hand and his fanged penis in the other. Fanged penis doesn't even make an appearance in The Program, and that is one more piece of evidence Caan is mailing this one on the slow boat. --OS

4:27 I get that you borrowed Navin Johnson's childhood home to show Alvin Mack's destitute background, but did you really have to dress his sisters like extras from The Color Purple? That just seems excessive. --RHJ 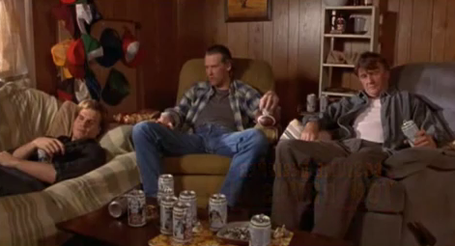 4:40 "Yeah, doesn't this drinking beer surrounded by sweet wood paneling and trucker hats look like the very definition of misery." "No, not a bit, dad. Pretty much exactly what I do every Saturday during the fall." "Then like every other lesson in this film, we've undermined it badly from the start." "Shore looks like it, pop."

"You know how they's supposed to know we're poor?" "How, dad?" "We don't clean up our beer cans. Just rollin' in 'em. Tidy drunk is a wealthy drunk. Don't tell anyone 'bout our beer tree, though." 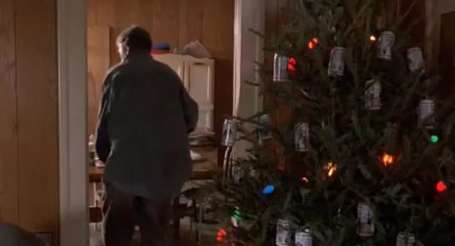 "And not a peep about the methamphetamine cactus."

4:50 Be wary, audience! The working television set stacked on top of the broken television set, the rack covered in mesh trucker hats of various colors, the abundance of cheap domestic beer - do not make the lazy assumption that Joe Kane's people are broke, trashy white people living in the South. If you learn nothing else from this film study, take away at least this: there are rednecks like these ALL OVER THESE UNITED STATES.

5:15 Halle Berry stole these clothes off a blind-drunk Carl Sagan. 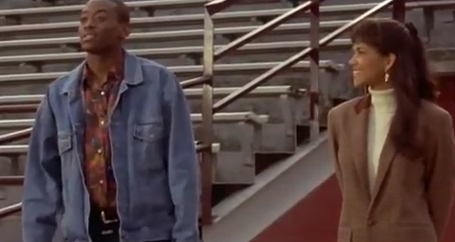 6:57 So you're just gonna stand on the church steps and announce you're going to ESU without any fanfare whatsoever, Darnell? Really? Can't you even reenact the story of Abraham and Isaac and pull a Timberwolves hat out of the ram once you slaughter it? 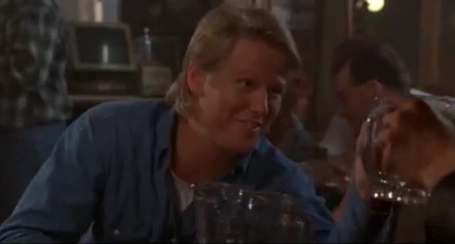 Ha-ha! The backup QB openly wishing for the injury of the starter! A Forcier was supposed to be in this scene, but transferred shortly before its filming and was later seen in the background of Necessary Roughness. As with every film about college students, these actors are all forty year old smokers, and are all dead now.

9:26 [JOE KANE IS ON THE COVER OF SI WITH A MICHIGAN QB] If your Heisman competition is a Michigan quarterback, is it really an award you want to win? I submit that it is not. Unfortunately, Joe Kane's candidacy doesn't shed much light on ESU's conference affiliation. He could be a stand in for Casey Weldon, or Eric Zeier, or Kerry Collins, or any number of goofy white dude quarterbacks that somehow were in the Heisman race.

9:27 Alvin Mack says "It'd be fun to kick the shit out of a Heisman Trophy candidate." Well, just make the title game against a Big Ten team, and that dream can become oh so very real, Alvin.

11:08 Autumn, played by Halle Berry: "I caught him with another girl. A white girl."

THE CHEATING SCALE AS JUDGED BY HALLE BERRY IN THE PROGRAM

12:37 "You may not get out of here with a degree, but they gonna keep you eligible." For what, girl? FLEET WEEK? 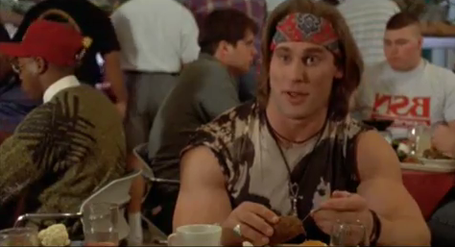 That fine line between "'93 metal" and "circuit boy?" Lattimer's on it for most of the film. We also learn that Alvin Mack is functionally illiterate. Hey, he can read what's on his shoe! It says "IMPENDING ACL EXPLOSION." It was a very popular brand in 1993. Sort of the British Knights of its era. --OS

14:25 And how do you market such a talented young player? By simultaneously 1) insisting that he is just "able" instead of, you know, awesome or great or kick-ass and 2) invoking fratricide! BRANDING POWER. 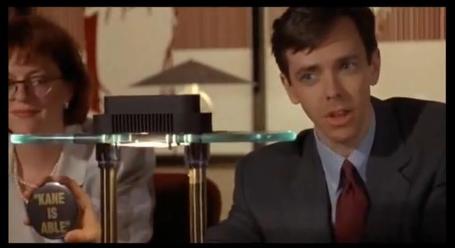 14:25 (cont'd) "Heisman voters hate opening envelopes." Mostly because they trust nothing without a wax seal and the family crest, just as they do to this day. Telegraphy is somewhat trusted, though still demonic to many. --OS

16:30 This is the film's first important coaching moment. After fumbling during practice, Darnell is given the ball by Coach Winters and instructed to keep it with him at all times, as his teammates have permission to attack him on campus to try and recover the ball for themselves. Winters warns Darnell of the vague consequences that will result if anyone else should return with the ball. Later, we see Coach Winters and Darnell wait no this plot point is almost totally dropped. --RHJ

Whew! Glad we're not all watching Lattimer and thinking, "Jesus, steroids look AWESOME." Cue Coach Winters, calling from a satphone somewhere in the Pamir Range. "Gentlemen. We're not doctors. The N-C-Two-Ay has a program for this kind of thing. I suggest we let them handle it. It's not that hard to gain 35 pounds over the summer if you hit the gym real hard." AND SWALLOW A FUCKING WEIGHT, JAMES CAAN. Or get a lead kidney donated and successfully implanted into your body.

Literally nothing about this sentence is right at all, but steroids are bad.

[/rep out at insane weight]

21:30 I lost a bet with myself here that Kane would tear his rotator cuff playing tennis with Camille Shafer. Much respect for not taking the predictable road there, The Program.--RHJ

23:43 During a tutoring scene, Halle Berry as Autumn says: "Pretending to be smart and being smart aren't the same thing. It's just a con, and makes you sound stupid." Or gets you a job as a columnist for the New York Times, but whatever. You're wearing a dead lemur on your head, and your bangs are terrifying, and please make B.A.P.S. 4 with Mo'nique. Please. --OS

25:56 Joe shows up on his motorcycle to pick up Camille for their first date because ladies really like it when you call them at three in the morning. She balks at the prospect of riding with him, however, to which he responds, "What are you, one of those trust fund princesses." This is a fair and valid criticism, for it is only the wealthiest of industrialists who instruct their children to avoid potentially dangerous forms of transportation. Middle class parents buy you an ATV and some previously owned kneepads and are done with it.--RHJ 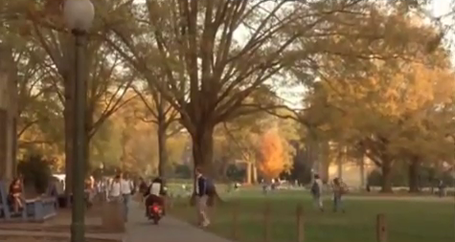 27:15 At first, this motorcycle ride has a very Purple Rain feel to it. Of course, Prince couldn't throw a deep out to save his life, so it's time to DIRTBIKE IN THE ABANDONED QUARRY! (Please note: much like rednecks, there are abandoned quarries all over the country, so we do not use this scene to draw conference conclusions.) --RHJ 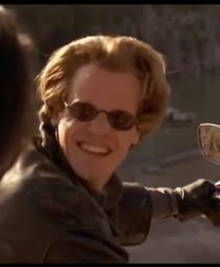 Hillary Swank's beginnings as a stunt double are unveiled by poor editing. --O/S

29:27 How do you treat the man who almost threw you off his motorcycle to your death? You slow dance with him next to a pool table, duh.--RHJ

SUMMARY: At the end of the first thirty minutes of The Program, our Which Conference Is ESU In chart looks like this: 3 points for the Big Ten, 2 for the SEC, and 1 for the ACC. Part two will follow tomorrow.